The Ford SYNC, in car connectivity and infotainment system is five years old, and as Ford announces the 5 millionth vehicle with SYNC we take a look back at the history of SYNC.

SYNC is a joint partnership with Microsoft that played a major role in driving the innovation for in-car connectivity and infotainment and help establish Ford’s focus on becoming a technology company that just so happens to make cars.

The SYNC system debuted in 2007, with options for controlling music playback and songs, growing over the years to connect to almost any Bluetooth or USB capable device to playback music, deliver directions and more. SYNC allows users to control entertainment, climate, navigation and phone calls with voice control.

The History of Ford SYNC

Let’s take a look at how Ford SYNC changes over the last five years.

Check out one of the first Ford SYNC commercials showing off song selection, and voice control.

In 2008, Cars.com takes a look at the SYNC system in a 2008 Ford Fusion, talking about the connectivity options. Ford and Microsoft didn’t limit the SYNC system to a specific device like the Zune, which turned out to be a very good decision.

In the clip below SYNC and a mobile broadband USB stick turns the Ford vehicle into a hotspot on wheels. 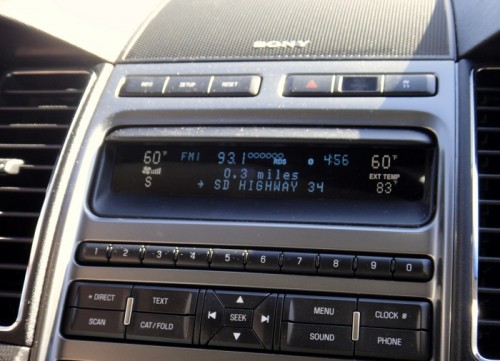 In 2010, Notebooks.com goes hands on with SYNC on a week-long road trip in a Ford Taurus. The system offers driving directions on a small heads up display and voice-guided turn-by-turn directions. The SYNC system connects to multiple Android phones and the iPad for playing music from Pandora and listening to Audible eBooks. And even recovers from a dead battery with grace.

For the 2011 model year Fords, the company added SYNC Applink, a new feature that lets users control iPhone, Android and Blackberry apps with their voice, through the SYNC system. Check it out in action in the video below.

In 2011 GottaBeMobile visited Ford’s headquarters in Dearborn Michigan to check out the MyFord Touch system, a new version of SYNC with an 8-inch touchscreen. Check out the video below.

As 2012 comes to a close, the first 2013 Ford vehicles with SYNC and MyFord Touch are rolling off dealer lots. This includes a smarter MyFord Touch system that owners of earlier vehicles upgraded to in late 2011, much like an iOS or Android update.

The most recent version of Sync includes 911Assist, which can call for help in an accident, a vehicle health report users can share with their insurance companies for cheaper rates and to quickly see the car’s condition and SYNC Services for traffic and other information.

Ford SYNC is available in one form or another on almost any vehicle in the Ford lineup, and offers advanced control to users that want more out of the system, and basic control of smartphones for other users.

Sync is almost iPad-like in its ability to deliver a good user experience to a large demographic. My in-laws use Ford Sync with their flip phones to make calls and not much else. In my new 2013 Ford Fusion I connect the iPhone over Bluetooth or with a Lightning cable to stream Pandora and Audible as well as using Siri while I am driving.

There are still features that Ford and Microsoft need to improve on, like bringing AppLink to the MyFord Touch system, and based on the latest update, it looks like Ford plans to continue adding features to the SYNC system without forcing owners to buy a new car to get them.