Ford is adding another option to technology package found on the 2012 Ford Explorer. The new Driver Alert System is yet another piece of technology which you can add to your new vehicle, in addition to the Ford SYNC infotainment system.

Ford’s in car electronic systems are best known for connecting with your smartphone and the use of an in dash touchscreen, but as we learned this summer, this is just the tip of the iceberg in terms of how Ford plans to use high tech to keep you safe and connected in a Ford vehicle.

The new Lane Keeping System will use a camera to monitor your lane, and detect when you drift into another lane. The system will alert you to the drift with a chime and a vibration of the steering wheel. Additionally, the Lane Keeping Aid will help you bring the vehicle back into the correct lane.

Ford will also help by recommending a coffee break for drivers which exhibit drowsy driving behaviors. When the system thinks that you are driving drowsy, it will alert you with a coffee cup icon on the dashboard, so that you can plan a quick stop for caffeine.

You can see the new Ford Lane Keeping System in action in this animation below.

The Driver Alert System is designed to help alert drowsy drivers by monitoring the vehicle’s movement compared to lane markings that are tracked by a camera mounted on the windshield. If the system detects a driving pattern consistent with a drowsy driver, a first-level chime will sound and a coffee cup warning will appear on the dashboard instrument cluster to recommend the driver take a break.
If the driver does not respond to this alert and the system continues to sense the driver is fatigued, another warning and chime will be issued. Drivers can monitor their condition on the dashboard at any time, even without receiving warnings. If they approach the yellow warning range, they should rest as soon as possible.
All information is reset as soon as the driver stops and either opens the door or turns off the engine. More than 40 percent of Americans say they have fallen asleep or nodded off while driving, according to a survey conducted by the AAA Foundation for Traffic Safety.
Lane Keeping Alert
The Lane Keeping Alert is designed to help drivers avoid unintentional lane changes. When the system detects the vehicle drifting close to lane markings, it will alert the driver through a vibration in the steering wheel to naturally direct the driver’s attention to where it is required.
This provides the driver with valuable time to react and steer the vehicle back into its lane. To calculate the lane position, Lane Keeping Alert uses data from the front camera on the windshield. A display in the dashboard instrument cluster lets the driver know when the system is operational as not all roads are well-marked.
Lane Keeping Aid
Lane Keeping Aid takes this technology even further by providing steering torque to alert the driver of the need to steer back toward the center of the lane. The system calculates the amount of steering required based on factors such as the distance to the lane markings, yaw angle and curve radius determined from the front camera and other sensors in the vehicle.
If the driver prefers, the Lane Keeping Alert can work in combination with the Lane Keeping Aid. When the driver signals, the system is deactivated so that the vehicle can change lanes without intervention. The driver can override the Lane Keeping Aid at any time through counter steering, hard braking or fast accelerating.
In these cases, the system recognizes that the driver has intentionally changed lanes. While steering torque is being applied, the system also can display a warning if a torque sensor determines the driver may not have his or her hands on the steering wheel based on the driver’s steering efforts.
If the system still detects the driver’s hands may be off the wheel after a few seconds, an audible chime is played to help prevent drivers from inappropriately relying on the Lane Keeping Aid.

According to AAA, 40% of Americans report falling asleep or nodding off while driving, highlighting the need for packages like this.

Ford is not the first car company to add such features, but given the high frequency of drowsy driving, it will be beneficial for everyone on the road to have more of these systems in action. Features such as this appear first as an option on higher end models, but through the years work their way into other vehicles as a standard option, so hopefully you’ll have similar tools as standard on a 2016 Focus. 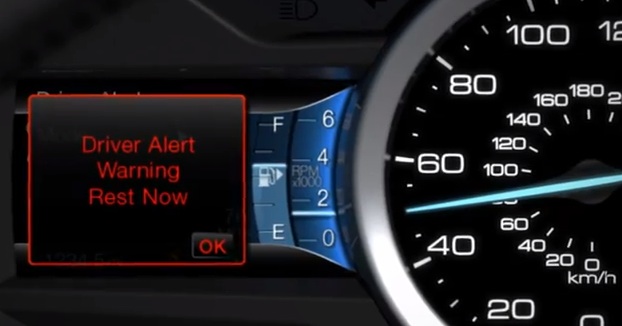 The new system will be available as an option on the 2012 Ford Explorer, but no price has been given.