Writing from my dream world feeling cool as I ink on my Tablet PC with a digital pen. Maybe it will get some attention. After all that’s what Daryl D is craving with his post about pen and paper working better than Tablet PCs.

At first I thought this was a clever link bait parody but then on a second reading I realized it was neither a parody nor was it clever link baiting. No matter. I think Daryl might be on to something. Ink and Paper are a better solution than a Tablet PC. Shocking you say? Read further.

Let’s take for example my morning of early meetings. I had three meetings scheduled away from the office this morning. One scheduled right after another. Each required me to bring documents with me that had been distributed ahead of time. Two of them required inking a deal as the planned result. 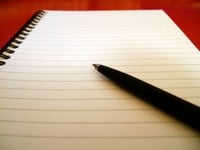 At my first meeting, although the documents had been distributed to me ahead of time, the other two meeting participants somehow didn’t have those documents with them. No problem. We’ll just copy mine. Once the copy machine jam was fixed. As we waited this allowed for more coffee, bagels, and water cooler chatter about American Idol. This was much more fun than actually getting down to work. Turns out the copier needed a part that the tech didn’t have with him/her so those documents weren’t going to get copied and I had to head to my other meeting. So we rescheduled for next week, with an admonition to all have the papers in hand.

My second meeting was to be a simple in and out, sign an agreement kind of affair. It was equally productive. Although we each had copies of the document in question ahead of time, some last minute changes necessitated some reworking of the language. We each dutifully scribbled the changes onto our respective copies of the documents and initialed them. My counterpart decided that the documents needed to be cleaner looking before he submitted them to the home office, so he instructed a secretary to quickly re-type the paperwork and 15 minutes later and after another breakfast goodie, we signed the deal.

I was by now running behind for my third meeting and when I arrived I had to wait 20 minutes or so while my counterpart dealt with some other business. I read a newspaper in the waiting room, and then headed to the restroom to wash the ink off my hands, unfortunately missing the moment the secretary told me I could go in.

I didn’t mind waiting another 10 minutes while her boss took a phone call. When we got together, I had my copies of the paperwork, but the gentleman I was meeting with couldn’t seem to lay his hands on his at the moment. His desk looked a lot that that picture of Al Gore’s desk that has been circulating lately. No problem. We would copy mine, although he was concerned because he had scribbled some important notes he wanted to discuss on his copy. While we waited we had coffee and munched on some homemade cookies his wife had made. We talked about some future dealings and I scribbled down some notes on a business card that I safely tucked away in my bag. The copied documents arrived at the same time as an important phone call for my counterpart, so I was excused for another ten minutes while he attended to business. Shortly thereafter we inked the deal and I was headed back to the office.

As I was driving back to the office, noticing that the morning had quickly moved towards lunch and feeling my appetite quite on the wane, I thought what a good decision it was to have used the plain old paper and ink method to get all this work accomplished, instead of the cool Tablet PC that I often use in these circumstances. I had delayed myself getting into the office by at least an hour and a half and that is always a good thing because there is nothing but more work to do there. I had basically saved myself the cost of lunch for the day because I had managed to basically have second, third, and fourth breakfasts, while we waited for paperwork to be taken care of. My diet suffered a bit, but what the heck. Had I used my Tablet PC, I could have, in two of the instances, quickly made the changes necessary and emailed the documents to the meeting participants right then and there. In the first instance, I could have emailed the documents to the participants and we could have viewed them on our respective devices and carried on with the meeting. But where’s the fun and free food in that.

Ok, reality check here. All three of the meetings above occurred this morning and each of the situations I described also occurred. However, instead of the waiting around, wasting time, and diet busting re–breakfasting, I was indeed able to use my Tablet PC to handle the issues that arose as I described, and move the meetings and my day’s agenda along quite nicely. And yes, as I was driving from one meeting to another, and then back to the office, I was listening to the most recent GottaBeMobile.com podcast using a bluetooth headset playing from my Tablet PC, given that I forgot to sync up my iPod before I left home.

I don’t mean to demean Daryl D too much for his silly condemnation of all Tablet PC users out there. He’s even backed off a bit in a comment to a post on jkOnTheRun responding to his original post. But if inking is what he thinks Tablet PCs are all about, the majority of the machine choices he’s tried out so far wouldn’t impress me either, given that most of them use passive rather than active digitizers. Tablet PCs aren’t for everyone and not every Tablet PC or UMPC is made alike. Tablet PCs are ideal devices for those who take the time to understand how they want to use the device and purchase accordingly. It is unfortunate that it requires more upfront research than it does to decide between a three hole or two hole binder to keep your papers in, but the benefits, in my opinion, far outweigh that small cost. They also have a positive effect on my diet.

Back to my dream world I go.

UPDATE: For another take on this, check out Sumocat’s post in the GBM Forums.