While the rest of the iPhone universe waits for iOS 7 to arrive later this year with a new user experience and new features, users who are willing to jailbreak the iPhone 5, iPhone 4S or iPhone 4 can enjoy a brand new iOS experience with 5 simple Cydia apps, themes and tweaks.

These iOS 6 Cydia apps offer a new users experience with a better look, faster access to apps and a much improved overall experience. After performing the iPhone 5 jailbreak, these apps will transform iOS 6 into an entirely new experience that is leaps and bounds better.

It’s easy to go crazy installing Cydia apps, but we’ve narrowed it down to 5 apps that fill specific needs and run smoothly with each other  All of these Cydia apps cost something  but for less than $15 you can get a completely new iPhone experience. In short, these are best Cydia apps you can buy.

Auxo is a great Cydia app that delivers a complete redesigned iPhone multitasking experience. Gone are the small icons and limited options of iOS 6. Auxo replaces them with thumbnails showing the app screen. This makes it easier to quickly skip back to an app without hunting through a sea of blue icons. 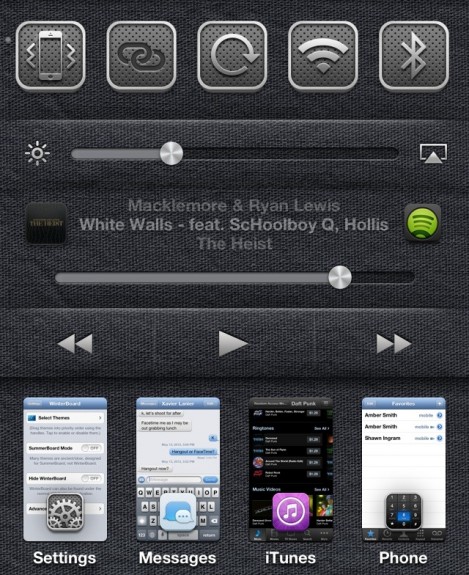 Auxo also offers a better music player control. Swipe to the side to quickly control music in the iPod and any other music app that is playing. It allows users to see full screen album art with a tap and control playback.

Another swipe and users can toggle common settings and control brightness. The brightness knob can be tough to grab occasionally, but it is still handy — and so are the toggles for Bluetooth, WiFi, flashlight and more.

Launch Apps from the Lock Screen 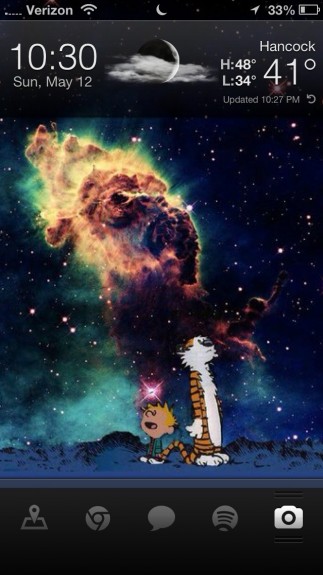 Axis includes stylized icons for many popular apps, offering a nice look even with third-party apps like Chrome. After customizing the Cydia app users can hold on the camera icon and slide left until on the app they want to open. From here a quick swipe up opens the app.

If the phone is secured with a Passcode the device will prompt users for it, unless it is the default camera app. Unfortunately it will always ask, even if the iPhone was unlocked 30 seconds ago and it is set to stay unlocked for 5 minutes.

Better Do Not Disturb

WIth iOS 6, users get Do Not Disturb, a feature that controls notifications manually or on a schedule, but it is missing some essential features.

The settings also allow users to set alert noises to off while in Do Not Disturb. Out of the box, Do Not Disturb keeps sounds silent when the screen is off, but if you are using the phone it will still vibrate and make noise. Toggle one setting and the phone stays silent.

Forecast is a great little tweak that brings the weather widget from the Notification Center to the lock screen. This is a small tweak, but it is one of the best tweaks for users who are dealing with temperature fluctuations spanning 30 degrees in less than a week. 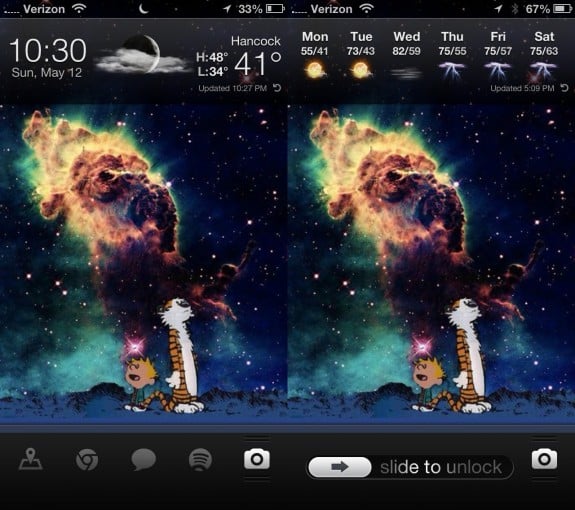 A faster way to get weather info on the iPhone.

Forecast lets users see the current forecast and swipe to the side to see a 5 day forecast.

iOS 7 is rumored to get an overhaul, but users can get a new look right now with a WinterBoard theme. After trying many, ayecon remains one of my favorite iPhone 5 Cydia themes.

ayecon changes the overall look of the OS in a number of ways including a new lock screen slider and too many small tweaks to mention. In short I have nearly a dozen iOS 6 jailbreak themes installed and it is the one I use on a daily basis.

From the automatic app icons for over 150 apps to the new look for almost every stock app you can change, ayecon is a must have. It also includes some killer backgrounds.