My in-laws are visiting for a couple of weeks and my wife tasked me with cleaning out our coat closet, which is behind the wall where I mounted my HDTV. One side of the closet has shelves that are home to my game systems, cable box, SlingBox and other gadgets. I wasn’t looking forward to organizing the closet, but I ended up having a great time as I found some long-lost gadgets, including my old Treo 650. 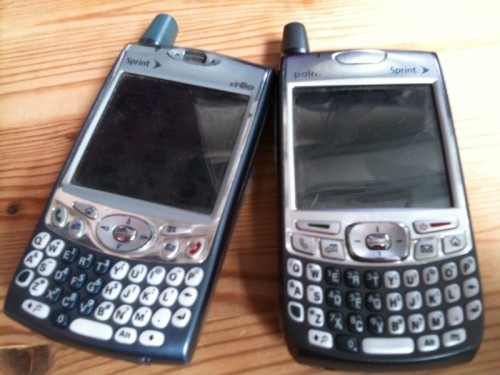 The Palm Treo 650 launched way back in 2004, two and a half before the iPhone. I snuck away from work on a cold winter day to buy one the day they showed up at a San Francisco Sprint retail store. The Treo 650 could be loaded up with apps and had an SD card slot, a VGA video camera and a stylus. The most important feature for me was having email on the go. For me, this device was magical.

Finding the Treo 650 brought back a lot of fond memories of being able to truly communicate on the go for the first time. I could edit work documents, respond to email, send photos and perform other tasks we all take for granted in 2010.

A few months later I was excited to attend a conference at Stanford University where a Palm exec was scheduled to talk about the future of mobile devices. There were several Palm execs milling about showing off concept devices, including what would become the Palm Lifedrive, a personal media player/portable 4GB hard drive. It looked like Palm would drive the future of smartphones forward. But then the presentation began…

The moderator asked the Palm exec what smartphones would look like in five years. All the Palm guy could up with was that in five years more people would be using phones that looked and functioned like the Treo 650. He pointed out innovative features like the physical ring/silence switch and the infrared port. It was pretty disappointing to see one of the guys behind the phone I loved so much forcing the issue of why it’s so much better to have such a switch than having to navigate menus to turn off a ringer.

I bought my wife a Treo 700 when it was released so she could also communicate more effectively at work.

In June of 2007 I unexpectedly bought the original iPhone after wandering down to the Apple store ‘just to check it out.’ I plunked down $600, placed the Treo 650 on a shelf in my closet and never looked back.

It’s sad for me to see the Palm brand in such shambles. It was only five years ago when friends were in awe of my Treo 650. About eleven years ago I carried a Palm Pilot and shocked people when I showed off its innovative features, including Grafiti. A few years ago, I thought Palm would be the future of mobile phones. Instead, the only Palm devices we own have been collecting dust for years. I can’t bear to let go of the devices and am putting them in my attic. It’ll probably be another 3-5 years before I look at them again. I wonder if there will even be a Palm brand at that point.