Starting today, users can check into all of their favorite local hangout spots with the new Foursquare app for Windows 8.

Microsoft announced the arrival of the native Foursquare client for Windows this morning, after having formally unveiled its imminent release during its BUILD conference in late June. While Windows 8 users who are less social might shrug their shoulders at the opportunity to instantly inform their friends of where they are using the application, according to Foursquare over 35 million people worldwide use their service, making it a serious victory for Windows 8.

That victory is made somewhat more special by the fact that the Windows 8 hasn’t had many top-tier apps and services to trumpet in its first year of availability. While the operating system continues to gain marketshare thanks to its inclusion on desktops and laptops, quality applications remain somewhat elusive. Unfortunately, Microsoft’s launch decisions for Windows 8.1, the free update to Windows 8 that already finished but won’t be made available until October 18th, isn’t likely to help that. 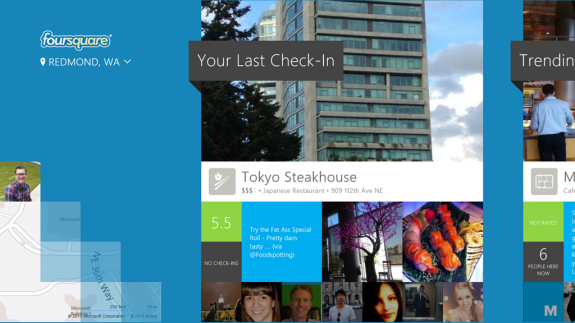 It doesn’t seem that developers cut any corners on Foursquare for Windows 8. Just like its mobile counterparts, users can browse their latest check-ins, places that have a high number of check-ins and even overlay those checks-in on a map.

The app integrates nicely with some of the native features of Windows 8 like the Charms. Using the Search Charms, users can query Foursquare for information about specific locations around town. In addition to showcasing a picture taken of that location, users are also presented with special offers and information on Foursquare users who have recently checked in at that location.

Microsoft was careful to note that Foursquare for Windows 8 is a first for the social networking company. Until now, the company had restricted its presence to smartphones. According to Microsoft, the app is the first time the company has arrived natively on “large-screen devices.” Microsoft says that such an experience will be available exclusively on Windows 8.