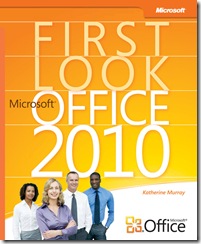 Microsoft Office 2010 isn’t scheduled for release until next year (that’s the 2010 part) but if you’re wanting to know some of what’s inside you can pick up a free book from MSDN called First Look Office 2010. This won’t be a fully fleshed out read as it is only a fresh look. It’s an eBook, which only seems appropriate. Keep in mind, you can use the Beta of Office 2010 free until the official release. You an get the book here.

Keep in mind the Office 2010 Beta is free for all. You can get it here.