Video game developer Electronic Arts has a huge surprise for Xbox One and PS4 gamers interested in NBA Live 16’s new Pro-Am mode. No doubt hoping to rain on NBA 2K16’s parade, EA will let anyone with an Xbox One or PS4 play NBA Live 16 Pro-Am for free.

Electronic Arts announced the free NBA Live 16 Pro-Am release this week in a post on the game’s blog. The free-to-try experiment is a huge deal as NBA Live hopes to catch up to Take Two’s NBA 2K16 in sales and mind share.

On September 15th Electronic Arts plans to throw open the Pro-Am mode for users to try. Pro-Am Mode in NBA Live 16 features pick-up games, custom player creation and more. All of Pro-Am Mode will be unlocked and ready for gamers to try. Electronic Arts says that it’ll offer other limited features too. Exhibition games for the Golden State Warriors, Cleveland Cavaliers, Oklahoma City Thunder, Chicago Bulls, Washington Wizards and Houston Rockets are coming. Drills and tutorials will also be unlocked so that users can adjust to the game’s controls and settings. 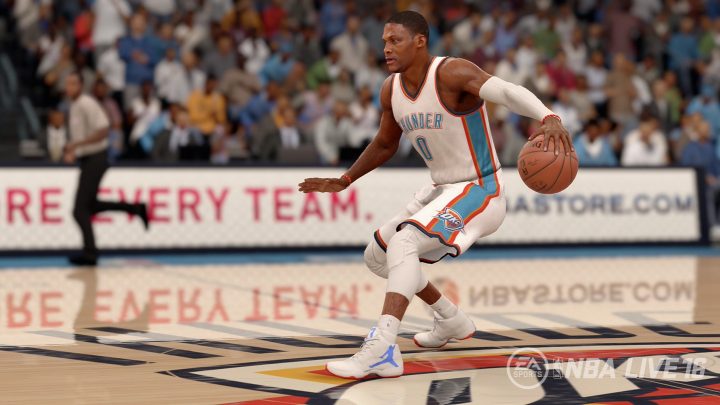 NBA Live 16 Pro-Am has more than a few tricks for users to try. Live Runs will let 10 users play on teams of five. Summer Circuit is described as a “a unique, cooperative online mode where you take on the NBA’s best  courts across North America.” Terminal 23, Venice Beach, Rucker Park, Kezar Pavilion, Brooklyn Park, Seattle Pacific University and Hoop Dome are featured. To be clear, gamers and their teammates band together in Summer Circuit to earn stars against the hottest in-game NBA talent. Each court has a difficulty level too.

Electronic Arts hopes to attract users to its basketball franchise with all sorts of new extras and upgrades. Back in July the company revealed some of the work its done to make the game look more realistic. A new lighting system in the game means sweat glistens off the foreheads of players. Facial expressions are said to be more realistic because of improved scanning technology. That same scanning technology was used to get accessories, courts and extras into the game too.

Electronic Arts is hogging that new scanning technology either, deciding to put it in the hands of users who want their custom player to look as realistic as they possibly can. The NBA Live 16 Companion app for iPhone and Android. Using the front-facing camera on smartphones, users will get their entire face put into the game for their player. The app and NBA Live 16 are stuffed with gear and accessories for users to customize their players with. In particular, Electronic Arts calls out the Jordan shoes that players can equip their characters with and the tattoos for the game designed by artist Randy Harris.

There are ball handling improvements in NBA Live 16 too. Better controls for dribbling and shooting are included in the game. Electronic Arts hopes that shooting the all will feel more natural, with improved timing. Hand-offs and inside shots have gotten feeling upgrades to make the entire title feel more natural to players.

Whether any of this will help improve NBA Live 16’s standing with gamers remains unclear. NBA 2K16 is breaking out a new Pro-Am mode of is own plus upgrades to its My Career story telling mode. Players can create their own customized teams and players with that game too. My Career was written and produced by film developer Spike Lee. Lee is hoping to tell the complete story of making it into the NBA, high-school struggles and all. NBA 2K16 launches on September 25th with an Early-Tip Off Weekend promotion for users that pre-order. With the NBA Live 16 trial coming on September 15th, players will get to decide early which game they’d rather have.

The full version of NBA Live 16 won’t arrive on Xbox One and PS4 until September 29th. NBA Live 16 has already completed the new console transition and won’t be coming to the Xbox 360 or PS3.