Just in time for the beginning of the regular season of Major League Baseball, wireless carrier T-Mobile is giving its subscribers free MLB At Bat access with their mobile calling and data plans.

T-Mobile announced the free MLB At Bat deal this morning with an addition to its website, and it’s being very generous with the savings.

Both users new and old get free MLB at Bat on their T-Mobile smartphone or tablet, provided that they live in the United States and Puerto Rico. Free MLB At Bat access for T-Mobile users lasts all season long, though data charges for doing things like watching video in the app still apply. MLB At Bat allows users to watch a single live streaming game each day, plus get up-to-the-minute statistics and updates from their favorite teams. The app also contains a lineup of always updated highlights from games that are happening live. Normally, MLB At Bat is a free download, but you need a $19.99 subscription to take advantage of these benefits. T-Mobile isn’t completely unlocking all the app’s features, according to a page about the Free MLB At Bat offer on its website. 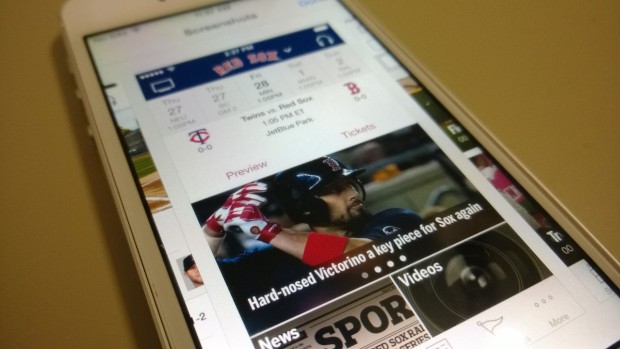 Any T-Mobile subscriber can redeem their free access to MLB At Bat from the Google Play Store and iTunes App Store now. T-Mobile says users will need to be off Wi-Fi and connected to their network for the redemption to work. After that they can stream over local Wi-Fi or T-Mobile’s network as much as they want. The Free MLB At Bat deal only lasts until September 30th. The app will continue to function correctly until October 4th, when the regular season ends. An MLB At Bat subscription only lasts for as long as the season does. The following year users need to make the purchase again. To be clear, the offer isn’t limited to a single device. After registration users can take advantage of their free MLB At Bat subscription on any device their MLB.com login with, which is required during the registration process.

Anyone with an iPhone or iPad running iOS 7 or anything after it can take advantage of this free MLB At Bat offer. It’s not as clear-cut for Android users. T-Mobile only says that “select Android devices” running Android 4.0 or later can download the app and stream games for free. Microsoft’s Windows Phone operating system no longer has a current version of MLB At Bat. As such, users on T-Mobile Windows Phones like the HTC One M8 for Windows and Lumia smartphones can’t take advantage of the deal.

Whether anyone is bold enough to cancel their contract and switch carriers to get access free MLB At Bat Access isn’t clear, but T-Mobile is hoping that those already looking for a new wireless carrier will take notice. On the same page with those free MLB At bat details are details for why someone might want to switch from a competing carrier to T-Mobile. For example, T-Mobile says that it has “more data capacity per customer than AT&T or Verizon.”

Beyond potentially faster speeds in metropolitan areas, T-Mobile offers early upgrades for users who enjoy buying new smartphones and already purchase insurance on their smartphones. Most of the networks plans include Music Freedom, a feature that doesn’t count music streaming toward the overall allotment of the data that customers use each month. Before the holidays last year T-Mobile unveiled DataStash. DataStash lets T-Mobile users who have a metered high-speed data plan save up so that they won’t be forced to use T-Mobile’s slower data network if they go over.

MLB At Bat is strictly for mobile devices like smartphones and tablets.