Free PlayStation Plus Arrives This Weekend

In what’s clearly an attempt at luring more users to its online subscription gaming service, this week Sony revealed that its offering free PlayStation Plus access this weekend. Everyone who owns one of the company’s PS4 consoles will get the opportunity to play online with other users. 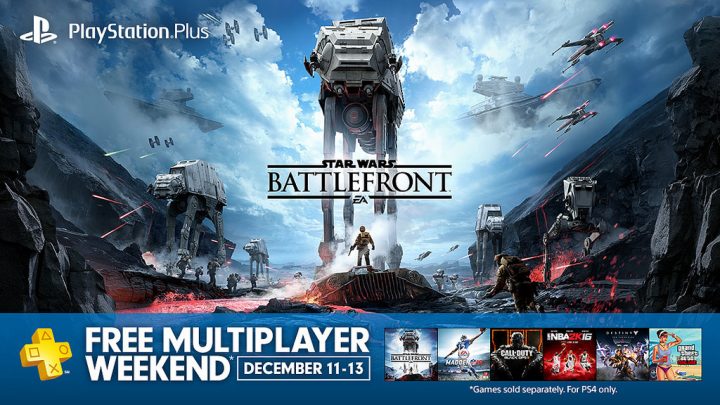 It seems that Sony isn’t just holding this free event to lure new subscribers to its service, it’s also trying to capitalize on the success of Star Wars Battlefront. That makes sense given that it recently lowered the price of its Star Wars Battlefront PS4 bundle to $299. Also, the game is getting a tie-in soon that’s inspired by Star Wars: The Force Awakens, the upcoming entry in the long-running film franchise. In a promotional image for the event, Sony teases Star Wars Battlefront, Call of Duty: Black Ops 3, NBA 2K16, Madden NFL 16, Destiny: The Taken King and Grand Theft Auto Online. All have multiplayer elements that’ll be unlocked this weekend.

Free PlayStation Plus Weekend is great for anyone that owns a title and wants to play online. Theoretically, it’s also great for users that might want to rent a game they’ve never tried before or wouldn’t otherwise have the means to play. GameFly and Redbox both offer video game rentals. So does PlayStation Store, through its PlayStation Now subscription service.

Taking advantage of Free PlayStation Plus Weekend doesn’t require any special code, but does require a decent broadband internet connection. It’s also a good idea to have a PlayStation headset or a pair of earphones at the ready in case a game requires some team work. The PlayStation DualShock 4 controller has a built-in headset jack, so gaming specific headsets aren’t necessary.

Hours ago, Microsoft struck back with its own Holiday 2015 related deals and event. The company slashed the cost of its Xbox One entertainment console bundles by $50 and revealed that users will get to play Elder Scrolls Online at no additional charge using Xbox Live Gold. That free games weekend promotion runs this weekend too.