Microsoft, maker of the Xbox One entertainment console, is using free Xbox One games to set itself up for a stellar fall and holiday gaming season. This morning the company announced its Xbox One Games with Gold line up for September and one free Xbox One game is attracting a lot of raised eyebrows: Tomb Raider Definitive Edition. 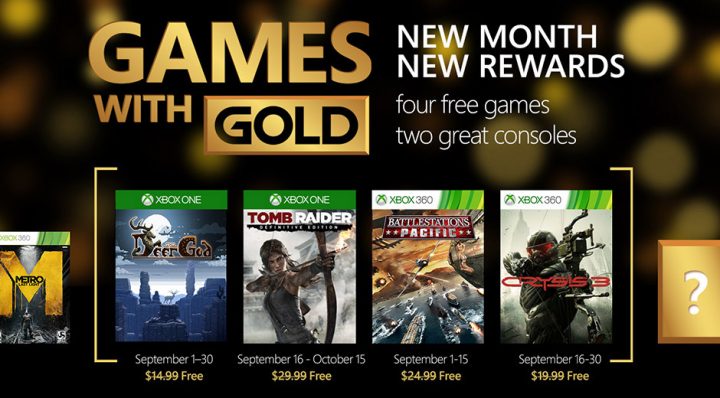 On September 1st Microsoft will give out digital copies of The Deer God to users at absolutely no extra charge. The Deer God is an independently developed platformer with pretty amazing graphics. It began life as a Kickstarter Project.

Tomb Raider Definitive Edition, September’s main attraction won’t become free until September 15th. It’ll stay free until October 15th overlapping with whatever free games Microsoft decides to give to users as part of Xbox Live Games with Gold next. Tomb Raider Definitive Edition is a remastered version of the Xbox 360 game that completely rebooted the Lara Croft franchise. In the game, Lara is stranded on an island along with other shipmates. Besides surviving, Lara has to come to terms with what she’s meant to do in life and how brutal though she has to be to do it. Really, it’s a retelling of the Lara Croft creation myth for a new generation of games.

Read: Rise of the Tomb Raider Release: 5 Things to Know

It’s very nature makes it the perfect setup for boosting Xbox One holiday sales. Microsoft locked down the sequel to Tomb Raider being made by video game developer Crystal Dynamics. Rise of the Tomb Raider is exclusively available on Microsoft’s platforms. Microsoft is effectively, giving everyone a taste of Tomb Raider, hoping to funnel as many gamers as it possible can into checking out Rise of the Tomb Raider. Last week Microsoft revealed that anyone with an Xbox Live Gold account can redeem Xbox Live Games with Gold titles on its website in preparation of their Xbox One upgrade.

Microsoft’s September Xbox Live Games with Gold promotion includes Crysis 3 and Battlestations Pacific too. Again, Xbox 360 users get to hang on to their games even when they no longer have Xbox Live Gold.

Smart Xbox 360 owners will head to Microsoft’s website and take advantage of the free Xbox One games. Users can establish an Xbox One games collection even before they actually upgrade their console. It doesn’t hurt that Xbox Live Gold users who already own an Xbox One will download the game and play it, giving it a significantly boosted profile before the fall gaming season. Including a free copy of Tomb Raider: Definitive Edition with its selection of free Xbox One games is a smart move, but it’s too early to tell if betting on Tomb Raider: Definitive Edition is a smart move for Microsoft or not. Critics loved Tomb Raider, but sales weren’t very high, some have said.

Xbox Live Gold has slowly turned into Microsoft’s dedicated subscription gaming service. Besides free games each month, Microsoft also throws in deep discounts on titles sold directly through the Xbox Store. For example, this week’s deals include discounted copies of Rory McILroy PGA Tour for $40.19. PGA Tour isn’t that old at all. The game launched this past June.