The often rumored, but never fully leaked Surface Pro 4 that runs Microsoft’s Windows operating system could come in multiple sizes or have a display with almost no bezel to support it. At least, that’s what we’re hearing in new Surface Pro 4 rumors ahead of next week’s Windows 10 Devices Media Briefing.

When Microsoft first announced that it would hold a Windows 10 Devices Media Briefing, there wasn’t much in the way of Surface Pro 4 rumors. Launched originally in 2012, the Surface Pro is Microsoft’s answer to both the iPad and the MacBook. Users are able to transform the Surface Pro from powerful notebook to powerful tablet by simply removing its cover and folding in its kickstand. One report says that the Surface Pro 4 will have a display that nearly runs to the edge of its display. Another report from a more credible source indicates that we could see Microsoft launch two different Surface Pro 4 tablets. 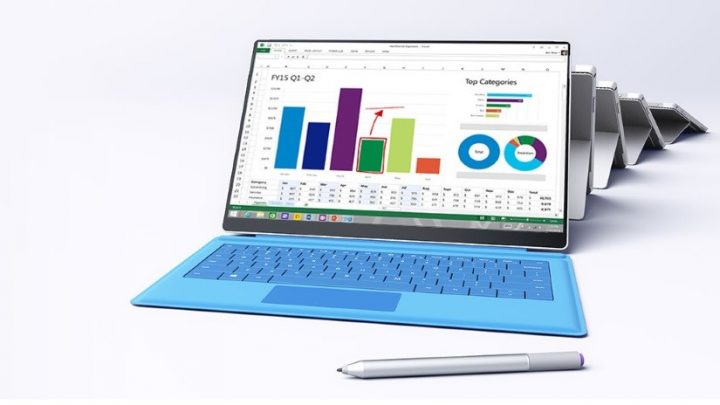 A Surface Pro 4 mock-up from W4phub

It’s a report from W4phub an Arabic news site that hints at a Surface Pro 4 having a nearly bezel free design. The site says that sources its spoken with believe that the Surface Pro 4 will use “smart frame technology” to dynamically adjust the amount of screen available to users as they switch orientations and modes.

Allegedly, the Surface Pro 4 will have a 13.3-inch display when in what Microsoft considers its notebook mode. Turning on Tablet Mode – which exists in Windows 10 already – automatically darkens parts of the display, shrinking the usable screen real estate down to 12-inches. The change in screen size is to account for a user’s to place their fingers when they’re holding the Surface Pro 4. Surface Pro 3’s have a somewhat unsightly bezel around their 12-inch displays.

The second set of rumors comes from Windows enthusiast site Windows Central. It believes that Microsoft is prepping two Surface Pro 4 tablets for release this year instead of just one. In a breakdown of what it thinks we can expect from Microsoft’s Windows 10 Devices Media Briefing, the outlet lists a Surface Pro 4 that’ll keep the same dimensions as today’s Surface Pro 3 and another that’ll have an even bigger display, perfect for taking on Apple’s new iPad Pro.

“There will be a second Surface Pro 4 announced in a 14-inch form factor,” the outlet declares in its report. Allegedly, this second Surface Pro will have a fan and be powered by Intel’s new Skylake processor. Storage options will include a 1TB SSD too. Facial Recognition for logging into Windows without a passcode and 4k display technology are said to features too.

Reportedly, the regular-sized Surface Pro will include Intel Skylake processors for better battery life & performance and Microsoft is eliminating the device’s fan entirely. Intel Skylake is a new set of processors created to be more power efficient and robust than the Intel Core processors inside the Surface Pro 3 today.

Of all the reports, the nearly borderless display rumor is the most interesting. Microsoft’s Surface team is obsessed with making it easier for users to have one device for every day use. An adaptable bezel that darkens part of its screen depending on what mode it is in could give users the best of everything: a notebook with a gorgeous display and extra space and a tablet with a great display that has some border to grab ahold of, but not too much that it overpowers the display. Unfortunately, the outlet the report originates from is pretty unestablished source of leaks. Windows Central, which says there are two Surface Pro 4 devices coming, does have a decent track record where leaks are concerned.

Microsoft’s Windows 10 Media Briefing is scheduled to start at 10AM on October 6th. The company says it will broadcast the event on its website for all to watch.