Here Is How Friends Will Work on the Xbox One

As detailed by a blog post on Xbox Wire, Microsoft is revamping how friends work on Xbox LIVE from top to bottom. Starting with Xbox One, users can have as many as 1,000 friends, completely outstripping the Xbox 360’s limit of 100 friends.

The company is also layering a new follower system on top of that 1,000 friends. Users can have an unlimited amount of followers and can follow as many users as they want. Just like Twitter, users will have the option to monitor all of their friend’s and follower’s activities with the new Activity Feed. Unlike with friends, becoming someone’s follower isn’t a two-way street. Users can follow Xbox LIVE members without their direct approval, though users will still need to approve friends. 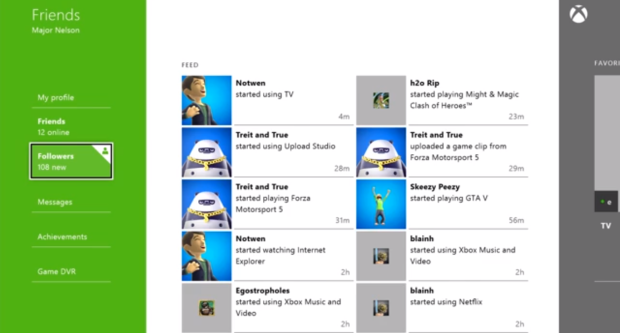 The process seems to mirror the way followers and subscribers work on Facebook.


The company also posted a new video showcasing some of the user interface for interacting with followers and friends. Although the short video clip doesn’t reveal anything that hasn’t been detailed already, it does offer the first look at how snapping applications in the new Xbox LIVE Dashboard will work.

The Xbox One is available for pre-order for $499. It launches in the United States on November 22nd.