Flappy Bird is taking the iPhone and Android world by storm thanks to a simple to learn but tough to master set of controls that is even driving gamers to look for Flappy Bird cheats to get a higher score.

If you can’t stand any more flapping, but you enjoy this same type of addictive and borderline repetitive gameplay, you need to check out the second hit from Flappy Bird Creator Dong Nguyen — Super Ball Juggling.

Like Flappy Bird, this simple game requires well timed taps to meet your objective and hit a high score that you can share on social media. 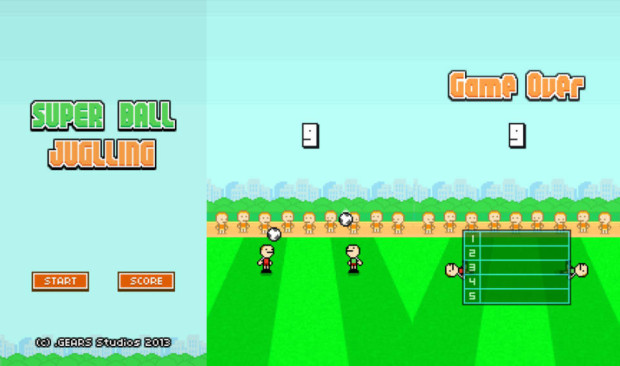 In Super Ball Juggling users must tap the screen to keep a soccer ball in the air for as long as possible. Timing the taps will kick the ball high or low, and can ultimately lead to a frustrating tap-tap-TAP that Flappy Bird players know all to well.

After a user hits a high score, they can share the score on Twitter, Facebook and by text, which is the root of a Super Ball Juggling cheat or hack that allows users to make a fake high score to share.

It might be easier just to find a screenshot with a higher score and share that on Twitter, but it appears gamers that like to play these games also don’t mind working hard to hack for a higher score.

If this isn’t enough, gamers can also check out Shuriken Block, another tap at the right time game from the creator of Flappy Bird. This free game is available on iPhone and requires users to tap on the screen at the right time to block ninja stars. Again, it’s not the most creative game on the market, but if you’ve mastered Flappy Bird, these two games will offer a similar challenge.