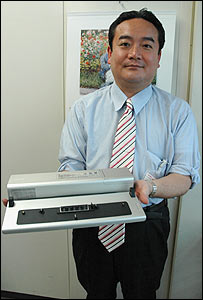 From the BBC, we learn that fuel cells in laptops could be right around the corner (image from the BBC):

The technology promises to supplement or replace today’s batteries in laptops. Instead of storing power, fuel cells generate electricity by breaking down methanol via an electrochemical process.

The cells can be recharged by topping them up with methanol from a cartridge.

Recently, Toshiba, Hitachi, Fujitsu, Samsung and Sanyo, among others, have shown prototypes that suggest that the technology is just around the corner.

It has taken time to shrink parts such as pumps to sizes small enough for the fuel cells to be commercially acceptable.