Fujitsu isn’t giving up on the UMPC market, having just announced a new model. The U2010 is aimed a the higher end of the market with a price estimated at $1295 and is scheduled for a July launch in Taiwan. A difference from previous models is that it will have a 6–row keyboad instead of five. Given that some with big hands find the smaller Fujitsu keyboards on these smaller devices a bit tough to work with, this will be interesting. It will also contain 3.5G connectivity and a GPS module. 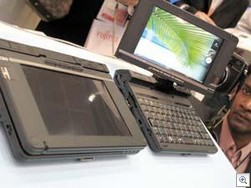