The Fujitsu Arrows Waterproof Android Tablet has one primary differentiator – you can dunk it in your pool and it won’t fritz out! The folks at the Fujitsu booth demoed this by submerging the tablet in a bowl of water and it kept running. You won’t go deep-sea diving or to the bottom for the deep end of the pool because they guarantee it up to only five feet deep for as long as 30 minutes. I doubt too many will want to play angry birds under water, but if you accidentally spill you bottle of water on it or drop it in the toilet while stall surfing, you’re covered.

Our own Chuong Nguyen caught up with the Fujitsu folks at CES 2012 to give us some hands on video and a dunking demo, proving that if you knock it into the sink while you wash dishes as you watch The Office on Netflix, you don’t have to call their support line for help. Just dry it off and you’re good to go.

Only Japanese consumers can get the Fujitsu Arrows Android Tablet, but the company says it will show up in the US soon. Their Fujitsu Arrows Waterproof Android Smartphone just received FCC clearance for sale in the US so, the tablet should show up soon in the States. 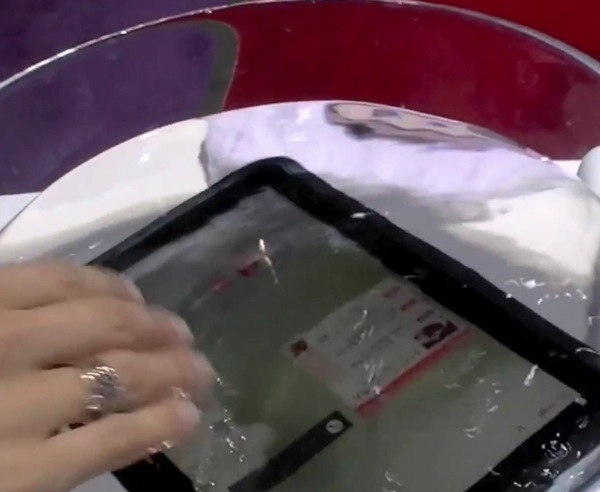 Other cool features include a 10.1″ 1280×800 res Fujitsu “quick-response panel” that Fujitsu says will make it easy to gesture. The working model you saw in the video above had the gesturing turned off so Chuong couldn’t show you how well it works. You can see the gesture-powered split keyboard, which you engage by bringing up the keyboard and then pinching out on the keys to allow for thumb typing. The Japanese model had handwriting recognition so users could enter Japanese characters. No telling if it will do the same in English.

The tablet runs on a OMAP4 1GHz dual-core processor. Dolby Mobile 3 audio powers the virtual 5.1 channel surround sound. In Japan it runs on 4G so it may have the same here in the US when available. 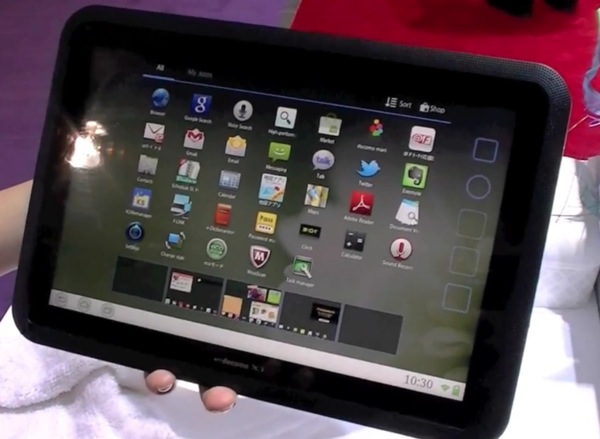 Fujitsu’s keeping quiet on the exact date and price here in the US. You can bet that, with the waterproof feature, they’ll ask a premium price compared to other Android tablets.

The tablet only runs Honeycomb at present. Maybe that will change.

Read more about the tablet over at the Fujitsu press page.