Regular reader Acerbic, in following up my review of the Fujitsu Lifebook T900, ran across a new product listing tucked into the Fujitsu site over the weekend: the Lifebook TH700.  It appears to be a consumer-oriented, entry-level Tablet PC with most of the Fujitsu amenities intact but a much lower price tag of $1149 or $1099 with mail-in rebate. 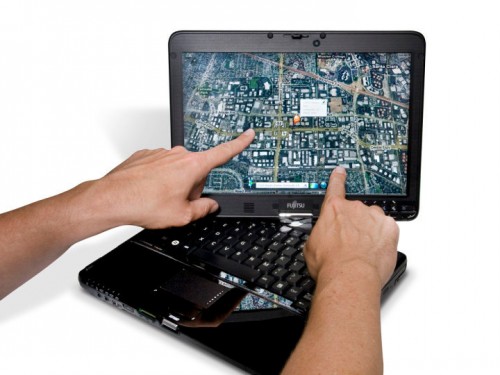 I apologize for not having found that myself and mentioning it in my review, but in digging around, I found that @shopfujitsu only tweeted it on Friday, which is when my review would have been posted had I not run into upload problems with the videos. It simply had not been announced at the time I wrote my review. Looks like I can chalk another odd coincidence to that week of hijinks.

I agree with Acerbic’s assessment that the TH700 looks a little chunky, not unlike the usual consumer-level Tablet PCs. At first glance, it does not strike me as having the same build quality and sleek feel as the T900, but that’s to be expected from what they call an “entry-level” Tablet PC.

However, it does sport all of Fujitsu’s tablet-specific features like the bi-direction swivel hinge, the sturdy flip latch, the modular bay for second battery or drive, removable dust filter, and hard drive shock sensor. In addition, it features a dual digitizer, fingerprint scanner, HDMI port, Bluetooth, 802.11BGN, and webcam with dual microphones. Only one configuration being offered, which includes an Intel Core i3 processor, 4GB of memory, 320GB HDD, and Intel HD Graphics.

It appears positioned as a direct competitor to the HP TouchSmart TM2. Doesn’t quite match the HP in price, but those unique Fujitsu features deserve serious consideration. Certainly that price forces me to rethink my choice for my next Tablet PC. Photo gallery on Facebook. Thanks again to Acerbic for finding this.