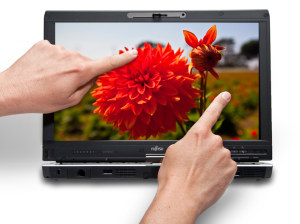 Mentioned briefly when they unveiled their new multi-touch Lifebook Tablet PCs at IFA 2009, Fujitsu, no doubt prompted by today’s Lenovo news, has officialized officialiated officialified announced in an official manner that multi-touch is an option on the Lifebook T5010 Tablet PC.

This is the Wacom multi-touch digitizer shown at IFA, which is currently limited to two-finger input but will be increased via software updates (still not sure if pen sensitivity, limited to 15 levels, is also software upgradable). No sign of the new models, T4410 und T4310, but they are surely on their way. Official press release after the jump. Hat tip to Gizmodo.

SUNNYVALE, CA, Sep 15, 2009 (MARKETWIRE via COMTEX) — Fujitsu gave mobile users in North America another reason to choose the LifeBook(R) T5010 convertible tablet PC today, announcing the convenience of multi touch input. The new dual digitizer’s touch screen function on the 13.3-inch display offers a new level of interaction by supporting two-finger touch for actions including panning, rotating, flicks and zooming. With seamless switching between pen and touch, users can change tasks on the fly, from casual surfing to detailed editing or writing.

The Windows Vista(R)-based LifeBook T5010 convertible tablet PC is the first in a line of new LifeBook platforms and form factors designed to take advantage of the advanced capabilities of Microsoft’s soon-to-be-launched Windows 7.

—   Priced starting at $1,759(1) with an active digitizer and priced starting at $1,859 with a dual digitizer option. Users can choose from a recommended configuration, or they can customize their LifeBook T5010 convertible tablet PC using the Fujitsu Configure To Order (CTO) program. Available immediately through the Fujitsu website and select retailers/e-tailers(2).