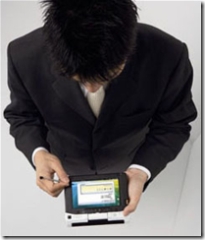 Warner posted this morning with specs on the new U Series Ultra-Mobile PC from Fujitsu ( courtesy of UMPCPortal.com ). Well, Fujitsu is making it all official now with their press release on this “Storm Trooper” look of a UMPC.

The specs look pretty nice for a secondary computer, but what is glaringly missing is Bluetooth. How in the world do they expect people to utilize the highly mobile aspect of the FMV-U8240 without integrated WWAN or support for tethering to a Bluetooth enabled phone? In my opinion, and apparently that of Steve Paine’s, too, is that they should have dropped the compact flash slot in favor of a Bluetooth card.

On the positive side, of which there are many to note about the new U series, is the support for an extended battery for life up to 8 hours with XP Pro ( 7.5 under Vista ). This device certainly gets the WOW in me going, but I’m going to need to try one out first before making any committments. I hope they implemented the excellent palm rejection technology present in their P1610 series. The 20GB harddrive definitely looks a bit challenging in this day and time. Vista will take a huge chunk, then all the apps, music, etc. I can see 20gb disappearing quite quickly. Update: From these specs, it appears that a 40GB HD option is available, and the drive is a Ultra ATA/100.

Here is a snippet from the official announcement, along with a table of specs. XP available in June, Vista in July. Full specs can be found here. Thanks GBM Reader James Arendt.

Fujitsu Limited today announced the addition of the U Series of ultra-mobile PCs (UMPCs) to its FMV-LIFEBOOK line of notebook PCs. Intended for business users, the U Series is the world’s smallest tablet-convertible UMPC(1), weighing only 580g and with a thickness of only 26.5mm. The new series is available as of today. Combining the usability advantages of a UMPC with robust security features, the U Series has wide-ranging appeal as a powerful mobile machine.

Fujitsu was quick to adopt the “Intel ® Ultra Mobile Platform 2007,” announced in April 2007 in the new FMV-U8240, which, with an ultra-slim profile and a weight of only 580g, represents the next level in ubiquitous computing. With advanced communications and security features, the U Series gives users the freedom to work wherever and whenever they choose, encourages new ways of working, and promotes field innovation, which improves productivity on the front lines of business.