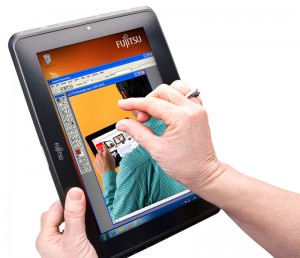 Fujitsu announced today that the Stylistic Q550 Slate PC is now shipping. Starting at just $729, the Fujitsu tablet is an affordable tablet designed for businesses that need to run full Windows apps.

The Stylistic Q550 slate is quite different from the Apple iPad, BlackBerry PlayBook and Android Honeycomb tablets. The first and most important difference is that it runs Windows 7. While Windows 7 is not designed specifically for slates, it is the only operating system that allows business users to run the same applications on their tablets as their laptops and dekstops.An anti-glare, high-brightness display is standard with the Stylistic Q550.

They Stylistic Q550 is designed with the clumsy businessman is mind and meets military specifications against dust, debris, temperature, vibration and drops.

The Stylistic Q550 starts at $729 with an Intel Atom processor, 2GB of RAM, 4-hour battery and 30GB SSD. There’s also an $849 configuration available that comes with a 62GB SSD, enhanced security, and an extended battery that’s rated to last up to 8 hours and 10 minutes.

More details over at ShopFujitsu.com