We’ve seen cell phone service like the Jitterbug targeted at seniors and those who have trouble pressing small numbers on a phone, but Fujitsu’s Stylistic S01 for carrier Orange is the first Android-based smartphone that’s designed and targeted for the elderly. The handset is scheduled to debut in June in France, and the concept may help smartphone adoption grow in the elderly population if successful. 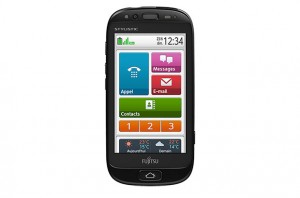 The good thing about the handset is that it may make it easier for seniors to have access to information that they normally would not have when using a non-smartphone, such as quick access to recent news events, weather information, or even navigation with GPS directions. The challenge for Fujitsu would be to not just create a homescreen for the target demographics here, but to also extend large, easy to access buttons to other elements of Android, including the browser, other apps, and throughout the OS much in the same way that Samsung’s TouchWiz implementation on its latest Galaxy smartphones, phablets, and tablets have a consistent look and feel throughout.

The smartphone will run on a relatively recent version of Android–Android 4.0 Ice Cream Sandwich. It will have a new home screen UI that’s proprietary with large buttons that will offer tactile response when pressed to mimic how physical buttons would feel.

The device will include an 8-megapixel rear camera, 0.3-megapixel front-facing camera, a 1.4 GHz Qualcomm CPU, and 4 GB internal storage that’s expandable with a micro SD card.

So far, neither Fujitsu nor Orange has announced pricing for the handset. According to Engadget, the familiar large-button UI has been seen before on the Raku-Raku phones for NTT DoCoMo in Japan.

It’s unclear if other manufacturers will begin to target this often neglected segment of the market for future smartphone UIs.