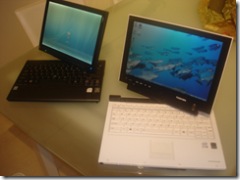 No it’s not Groundhog Day, but it seems as though it is Fujitsu day for me. A little earlier today I blogged about getting the Fujitsu U1010 Ultra-Mobile PC so I thought I better also let you know that I have the Fujitsu T2010 Tablet PC, too – as seen on Engdget. This is one of the best little scoops I have received this year and it came by nothing less than a coincidence! As I was on the way back from a meeting earlier this week I decided to stick my head into the Fujitsu office (to show off my U1010) and low and behold there on the desk was the Fujitsu T2010! All black an begging me to take it home. 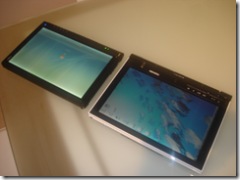 Last time I was in their office the entire world was turned upside down, and Servers worldwide went into meltdown, as I had been given the world exclusive look at the P1610 (then codenamed The Chalice.) On this occasion it is almost just as exciting and definitely as arousing (Can’t believe I just said that!) as I have walked out with a brand new Santa Rosa T2010 too! 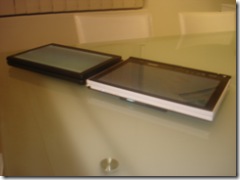 At this stage you should probably know that recently I have put down my hard earnt dollars on a Toshiba R400. Because I am going on an extended holiday (two months) to Europe I settled on the R400 as my device of choice for several reasons. Today however I almost regret it as the T2010 is something else! While I have owned the R400 for the lengthy period of 7 days I am now starting to think of an upgrade!

Once again I will be uploading a video for your perusal so feel free to ask questions and leave comments. Until then enjoy the pictures.  Make sure you have a pack of tissues with you to wipe the drool off the screen. LOL.