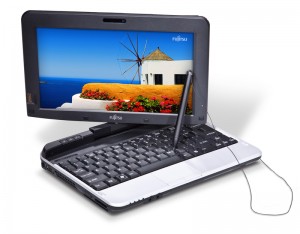 I know at least a couple of you have been waiting patiently for this: The Lifebook T580 Tablet PC is now listed on Fujitsu’s online store with both custom and pre-configured “Express Buy” options.

Previously marketed as a “slate-beater”, this bi-directional convertible features a 10-inch, 1366 x 768 LED-backlit display with dual-digitizer with both active pen input and capacitive touch capable of recognizing up to four points of contact. The “Express Buy” option is built for endurance with an Intel Core i3 processor and 6-cell 5800mAh battery, as well as 2GB memory and 160GB SATA 5400 rpm hdd for $1,149. Wireless includes 802.11a/b/g/n and Bluetooth. The WLAN and GPS options previously advertised do not appear to be available at this time (at least not in the States).

As a Tablet PC, the T580 looks like a good portable choice. Nice to have an active digitizer in a size that has been ruled by Intel Atom-powered touchscreen convertible netbooks. Unfortunately, between the weight, price, and expected battery life, I don’t think it’s going to receive much praise a “slate-beater” any time soon.