I love Texas Hold’em Poker. I used to play a lot online, but the US Government put an end to that. I would play for fun on Facebook, but when there is no real action involved, people play loose and just roll the dice. There is no fun in that. When playing against computer opponents, there is some level of skill involved. Well, at least more skill than the entire table going all in all game.

I’ll save my real poker for Vegas, but I want a game to have some fun killing time on occasion.

Enter Full House Poker, an Xbox Live title available for Windows Phone 7 as well as on the Xbox 360. The game works together seamlessly between the Xbox and your Windows Phone.

Full House Poker was developed by Krome Studios and published by Microsoft Studios. 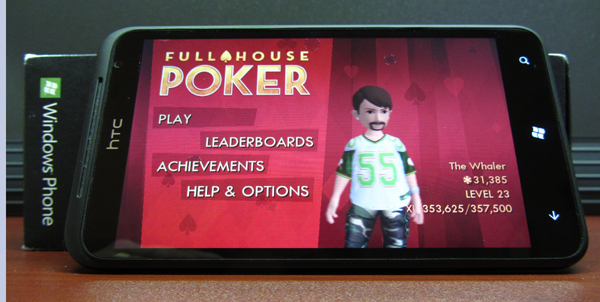 Full House Poker integrates well with Xbox Live and its big brother on the console as I mentioned above. The Windows Phone version is stripped down a bit and unfortunately, it does not allow for games against friends. The computer opponents come in a mixed variety. Some are pushers that bet big with low pair. Some actually bluff here and there. Some are aggressive, some limp in all game. In the tournament mode, you can quickly identify each style your computer opponents fit into, taking a little fun out of the game.

The game play is quite simple. You throw your cards into the middle with a flick of your cards, call by tapping call, go all-in by selecting all-in, and you can raise or bet by sliding the bar to indicate the chip amount. If you fold a hand, the game allows you to fast forward the hand to speed up the game.

Just like with Xbox 360 games, you have achievements.  There are currently 20 achievements to shoot for. In addition to the regular achievements, there are a few that reward ring tones that are added to your custom ring tone list.

Full House Poker has an XP based leveling system. You get XP for getting out of a hand with a smart fold, just getting dealt into a hand, folding without action, winning consecutive hands, and more.

Check out the video below for a walk through of this Full House Poker.

Full House Poker is my favorite game so far on Windows Phone. I have many wasted hours playing already. The Xbox integration with Full House Poker is very well done. Being able to have your XP and chips shared between the Xbox 360 and Windows Phone is awesome. I know it’s trivial, but having my Xbox Live avatar follow me into a game is a nice touch.

Full House Poker is only $2.99 in the Windows Phone Marketplace. You can try it 1st, but I say just buy it.