Those who were planning to take in iSteve, the documentary/comedy starring Justin Long, can do so free of charge.

The film, which made its debut on April 17th, is the first in a stable of films that will depict the life, times and experiences, of Apple’s previous CEO and cofounder Steven P. Jobs.

iSteve takes a decidedly mixed tone to Jobs’ life, depicting him a very kind generous and misunderstood person, going so far as to depict Jobs as caring very much what the technology press thought of his keynotes and the way he delivered them. 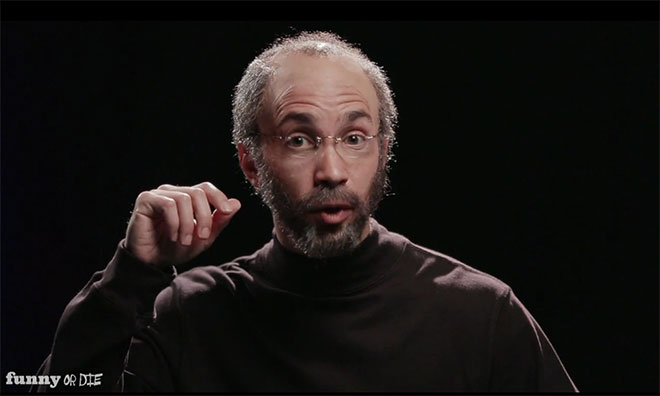 During the 78 minute long film headlined by Justin Long, who stared in Apple’s “Switch” ads last decade, Jobs even exclaims the night before a keynote that “This is the part where I start losing confidence”. Jorge Garcia also stars as the other Apple co-founder Steven Wozniak. Garcia is best known for his role in J.J. Abrams’ Lost which aired on ABC.

iSteve’s light but serious take on Steve Job’s life is strange for Funny or Die, the production company and accompanying website has made a name for itself by often spoofing it’s topics –something that it appears to have made a conscious decision not to do here.

Another film, which will attempt to take a more serious tone will has already began filming. Jobs, stars Ashton Kutcher as Steve Jobs and Josh Gad as Steve Wozniak and attempts to take a more serious look at Steve Jobs life after dropping out of college and as he and Wozniak’s founding of Apple. According to IMDb, that film had been due for release in April of this year, but has now been delayed until further notice. Jobs was first shown in its entirety at the Sundance Film Festival earlier this year.

Jobs formed Apple Inc. with Wozniak in 1976. After Jobs was forced out of the company in 1985, he began a new computing company called NeXT. When Apple needed a base from which to build Mac OSX, the company acquired NeXT in 1997 and brought Steve Jobs back to lead the company as it moved to fix its balance sheet and streamline its product offerings.

In the period following Steve Jobs’ return, Apple produced a string of computing and entertainment devices that were a hit with users including the iMac, iPhone, iPod, iPad, and the company’s Macbook line of computers. Steve Jobs passed away in 2011 from complications due to pancreatic cancer.