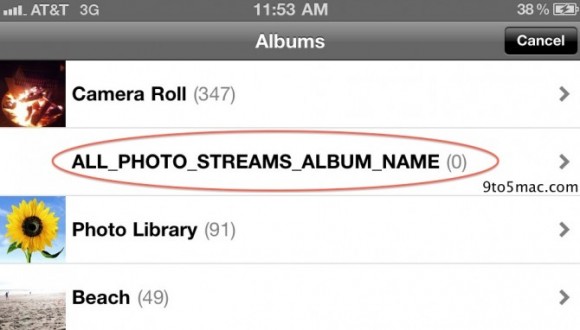 There are now further hints of a social photo stream feature was found inside iOS 5. An iPhone 4 user had reported that there are reference to Photo Stream photo albums on iOS 4.3 on an iPhone 4, but those references were not visible to users in the Photos app but were revealed by links in a third-party photo editing application. According to 9to 5 Mac:

9to5mac reader Mario Piombo spotted references to Photo Stream albums in his iOS 4.3 iPhone 4. The references are hidden from the user’s plain view of Photos.app and were discovered via a third-party application, which allows the user to select photos from their library for editing.

Based on earlier reports, Apple could allow iPhone users to set-up a photo stream account and invite select users to view their photos. Rather than have users upload images to a website, like Flickr, Apple could allow users to stream their photos automatically to friends, where the images would be stored in a special stream folder, much like how camera images are stored in a camera folder inside the iPhone’s Photos app.

The feature would be an extension of old iPhotos for Mac OS X feature called Photocast, which would allow users to send select photo albums to select friends. Photo Stream may be the same premise, but only for mobile instead of for the desktop.

As Photo Stream references were found on iOS 4.3, it is speculated that the feature may make a MobileMe debut and be a large social component on iOS 5. In the past, Apple was also rumored to be working on a cloud-based photo storage system that may help iOS users become less dependent upon local storage memory. However, the focus here may be more socially-driven rather than storage-driven.

Rival Microsoft had a similar photo back-up storage and sharing feature on its KIN phone system through the Web-based KIN Studio, an online portal. Essentially, all images that are captured on the now discontinued KIN phone would get automatically backed up in a timeline on KIN Studio so that a cached image would appear on the phone to save on storage space, rather than the full-sized image. Users can either share the images with friends via the KIN Studio portal or on the phone. It seems that Photo Stream may be a similar feature to KIN Studio, but the primary goal of Photo Stream may be sharing experiences and photos to other iOS members and could help Apple join the social network race and bypass Facebook or Twitter.