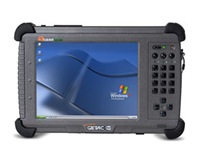 I have been playing with the TabletKiosk GETAC G840XT for a week or so and thought I would put up some of my initial thoughts.

If there is anything you would like to know about the machine just let me know!!  This week is going to be jam packed with information about this unit!