Today the Galaxy Nexus launched on Verizon Wireless. While you have been able to purchase an unlocked version to use on AT&T for a month now, this is the first 4G LTE Google Nexus phone.

The Verizon 4G LTE speeds are incredibly fast, and now that the high-speed wireless network covers more than 200 million people, there’s more reason than ever to purchase a 4G LTE phone like the Galaxy Nexus. This was one of the biggest reasons Adam Mills decided to purchase the Galaxy Nexus.

With advertised speeds of 10 times faster than the 3G network that the iPhone 4S runs on, 4G LTE is perfect for watching live NFL Games, Hulu Plus, Netflix or gaming on your phone with Onlive. 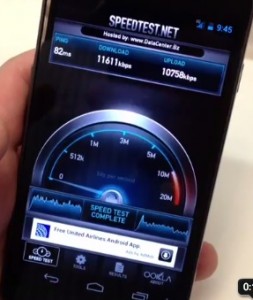 In the video below, you can see the 4G LTE speedtest for the Galaxy Nexus on Verizon in Findlay Ohio. This 4G LTE coverage was just added, and these speeds are even slower than some I have seen on my ThunderBolt and other review devices.

These speeds — 11 Mbps down and 10 Mbps up will vary from location to location, but if you have 4G LTE coverage you can expect similar speeds.

If you need to get a Galaxy Nexus on Verizon, check out our Buyer’s Guide to find the best prices on the Galaxy Nexus. Deals start at $155 for new customers and $175 for current customers.