The Galaxy Nexus on Verizon is an impressive phone, but one of the biggest issues we have seen is poor battery life.

It was an issue during our Galaxy Nexus review, and has plagued some of our writers who have seen “unacceptable” Galaxy Nexus battery life thanks to the massive 4.65″ display and 4G LTE connectivity.

I had similarly poor battery life the first few days I owned the Galaxy Nexus, but after a few days of use battery life has improved — I’m talking hours of improvement.

As you can see in the screenshot below, I was able to go close to 16 hours before the battery warned me that it had dropped to 14%. 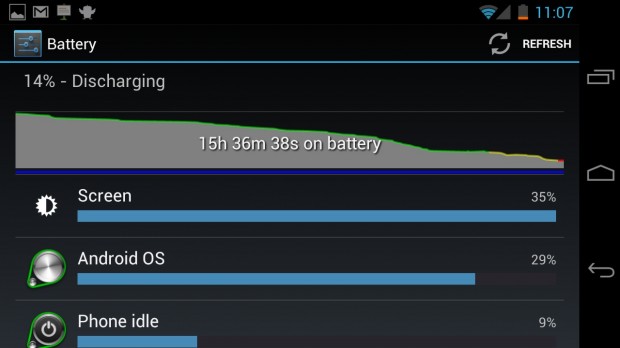 The Galaxy Nexus extended battery lasts 16 hours after a charge and swap.

I haven’t done any crazy tweaks, like turning off 4G LTE or setting the display to 1% brightness. All I did was switch out batteries on the device. I know. This doesn’t make sense, but there was something funky going on with my extended battery and the Galaxy Nexus over the weekend.

I charged the extended battery to 96% before going to bed and then swapped it out to charge up the standard battery. When I woke up and put the extended battery back in it had dropped down to 89%. This tells me that something goofy was going on with my battery or with the reporting software in Ice Cream Sandwich. While this is but one data point, I can’t argue with success.

If you have a Galaxy Nexus extended battery, or even just a second battery, here is what I did. Feel free to give it a try and leave a comment telling me if it helped your battery life.

This works out best if you have the battery charger, but you can try it out without. Doing these steps, and nothing else, I was able to jump from 10 hours of battery life to 16 hours.

I know it doesn’t make much sense, and perhaps I am missing out on a Christmas gremlin that snuck in and gave me a better battery, but even in my low 4G LTE signal area I was able to get longer battery life.

How are you faring?