The Samsung Galaxy Note 2 is only a few days old, but it’s already available for preorder for users willing to pay a premium.

Users who can’t wait for the Galaxy Note 2 U.S. release date can preorder the Note 2 from Negri Electronics for delivery ahead of the U.S. launch on AT&T. 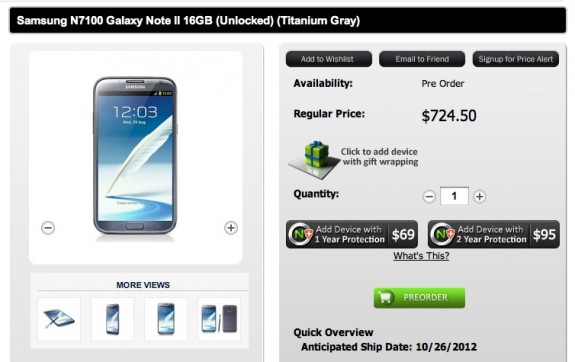 AT&T and T-Mobile customers who can’t wait can preorder an unlocked Galaxy Note 2.

Paying over $700 is steep compared to the $200 and $300 phone costs with a carrier subsidy, but users that are in the middle of a contract or want the benefit of an unlocked phone that can work with almost any carrier SIM.

Users who are sick of waiting for the T-Mobile Galaxy Note, can purchase the Galaxy Note 2 from Negri Electronics to use on T-Mobile, but will be in for 2G and Edge speeds until the 1900Mhz 4G coverage is available. This 4G coverage could be available later this year.

AT&T users who want to get the Galaxy Note 2 before it launches on AT&T, likely late in 2012, can pick up this unlocked model and enjoy faster speeds than T-Mobile. With a late 2012 Galaxy Note 2 U.S. release date likely to start with AT&T, users may want to hold off unless they would be paying full retail at AT&T.

Samsung did not announce pricing, but we expect the phone will retail for $199 for 1^GB, $299 for 32GB and $399 for the 64GB model when they arrive with carrier discounts.

Negrei Electronics is only offering the Galaxy Note 2 preorder in the 16GB model, but it is available in Titanium Gray and Marble White.

Stay tuned for out Galaxy Note 2 hands on.