The Galaxy Note 2 is an impressive smartphone that delivers productivity and features worthy of the large size. With a keyboard or by itself,the Galaxy Note 2 is a powerful mobile companion that lets me get work done when there is a break in my day.

After using the Galaxy Note 2 for the past several months I find that I am carrying it instead of an iPad or iPad mini. While I typically carry it as a companion device to my iPhone 5, it is more than suitable as a primary smartphone and small tablet.

With the large display, powerful software and a ZAGGKeys Flex keyboard, I’ve found an excellent mix of portability and productivity in an always connected device that can even handle my occasional phone calls. 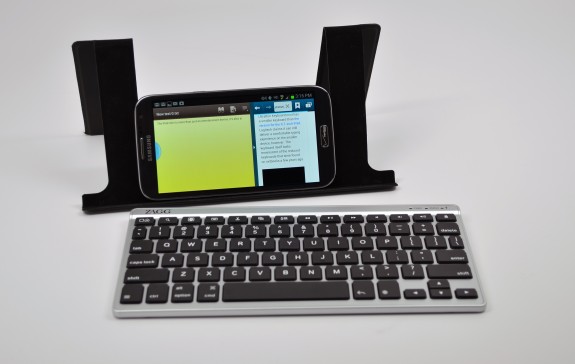 The Galaxy Note 2 and a Bluetooth keyboard delivers great productivity.

The Galaxy Note 2 features a large 5.5-inch display that offers more flexibility than the iPad mini by offering up a multi-view feature that lets users use two apps at the same time. This makes it possible to reference something while I am writing on part of the screen. Not every app will work with the Multi-Window view feature, which is very frustrating  but the included Polaris Office app, the default browser, the Falcon Pro twitter client and others do.

There are times where I enjoy the focused experience of writing on the iPad mini, but just as often I am left double tapping t switch between email or the web browser to check a fact on something I am writing about. 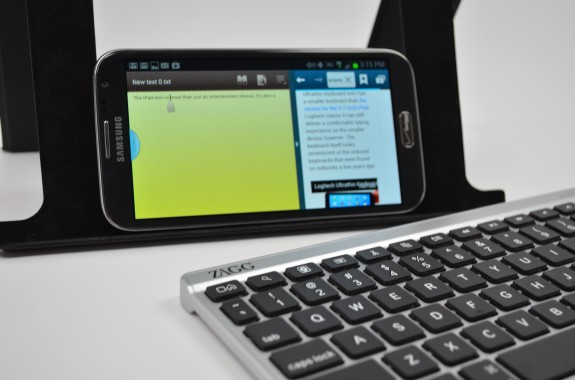 With Multi-Window View I can use two apps at once.

With the Galaxy Note 2 I can keep a large writing area on one side of the phone and a web page or other app on the left, so that I can do more without taking my hands off the keyboard. This is similar to how I work on a laptop or at my desk.

The Galaxy Note 2’s screen is much smaller than the iPad mini, but when it comes to productivity I’ve found that it is large enough to help me get work done, and certainly large enough to warrant the Multi-Window feature, which Google would be wise to adopt as a standard Android feature. 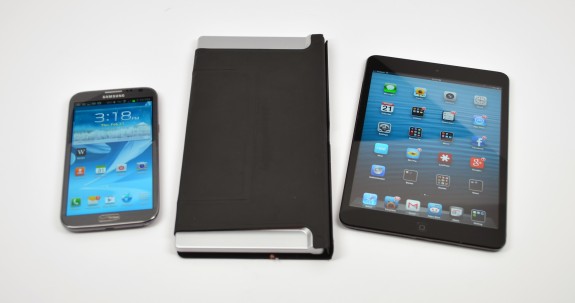 The Galaxy Note 2 vs. the iPad mini, showing size advantages. 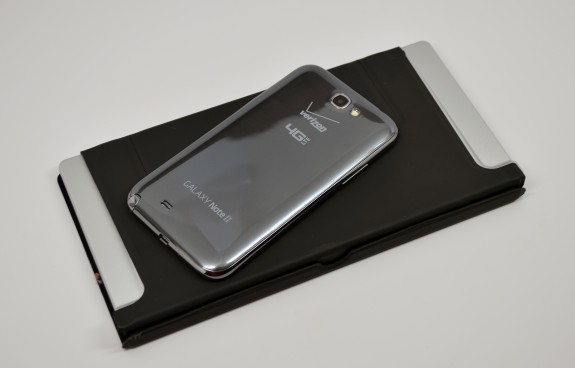 Though not unique to the Galaxy Note 2, I can quickly connect with my co workers using Google+ and Google Hangouts while on the Galaxy Note 2. I am using the Verizon Galaxy Note 2 with 4G LTE, which delivers blazing fast speeds wherever I travel, so I don’t need to worry about hotspots or connectivity.

The Galaxy Note 2 also features the S Pen, a small stylus that brings some unique features to the table. After getting over the initial excitement of the S Pen, I found that I don’t use it very much. The Hover feature is handy, but I am often using the Galaxy Note 2 with a keyboard, or with two hands rather than with the S Pen. 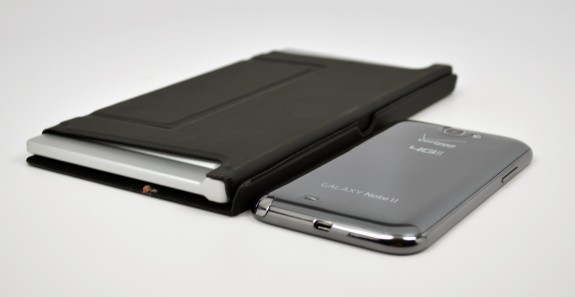 The Galaxy Note 2 next to the ZAGGKeys Flex.