The Galaxy Note 3 will reportedly dwarf the Galaxy Note 2 with a 6.3-inch display that may cross the bounds from phablet to tablet in 2013.

The Galaxy Note 3 rumor comes from the Korea Times, which claims Samsung is working on a larger Galaxy Note for 2013.

If the Korea Times’ source is correct, the Galaxy Note 3’s display is a full inch larger than the original Galaxy Note. The Galaxy Note 2 features a 5.5-inch display which is already quite large, though not too large to use as a phone. 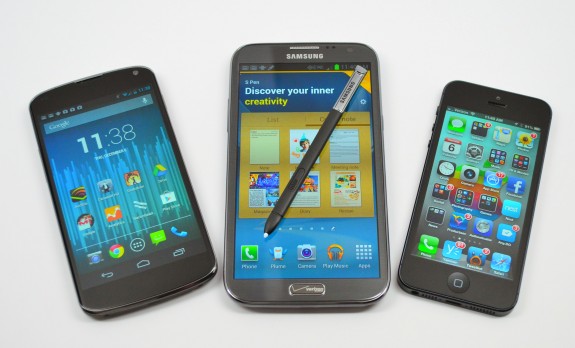 Other than plans to use a 6.3-inch OLED display in the Galaxy Note 3, there are no rumored specs for the phone. There’s always a chance Samsung will opt for a flexible or unbreakable display previously rumored for the Galaxy S4.

Given the rumored large size of the Galaxy Note 3’s display it’s possible this device could be it’s own Note brand, as a mid-sized tablet to compete with the iPad mini and Nexus 7, both which offer cellular connectivity.

The Note 2 sales hit 5 million recently, after launching internationally and on all major U.S. carriers, providing the backing Samsung needs to push forward with the Galaxy Note 3. Competitors like HTC are launching attacks on the Note 2 with the Droid DNA, a large screen smartphone that HTC doesn’t want to call a phablet. The LG Intuition is another Galaxy Note 2 competitor hoping to cash in on the demand for larger screens. Not to be left out, Huawei is planning a Galaxy Note 2 competitor.

The secret to Samsung’s success, in addition to keeping the phone thin and relatively light, is that it focuses on allowing users to do more with the large display of the Galaxy Note 2. Owners can use Multi-Window view to see two screens at once. This makes it possible to watch a video while reading email or combine two other apps.

Samsung also includes pop up video and pop up browser apps that places a small video or browser window on top of another app, so users can do more with the display.