Galaxy Note 5 vs Nexus 6: What We Know So Far

If you’re in the market for a big-screen Android smartphone as the 2015 fall months approach, two excellent choices will be the readily available Nexus 6, and the upcoming Galaxy Note 5 from Samsung. With the Galaxy Note 5 launch date strongly rumored for August 13th, here’s what you need to know and how it compares to Google’s Motorola Nexus 6.

In September of 2014 the Galaxy Note 4 was unveiled in Berlin at the annual IFA event, just like the three models before it. Many expected the same approach this year with an announcement and middle or late October release date. However, it appears the new Galaxy Note 5 is coming much earlier, to take on the competition and beat Apple to the market.

The Nexus 6 was actually announced and released around the same time as the Galaxy Note 4, so they are two devices that are very similar and have been compared time and time again. What this means, is the Note 5 will likely have a lot more to offer, but probably cost more too. Read on for everything we know so far, and a few things that separates these two devices for buyers. 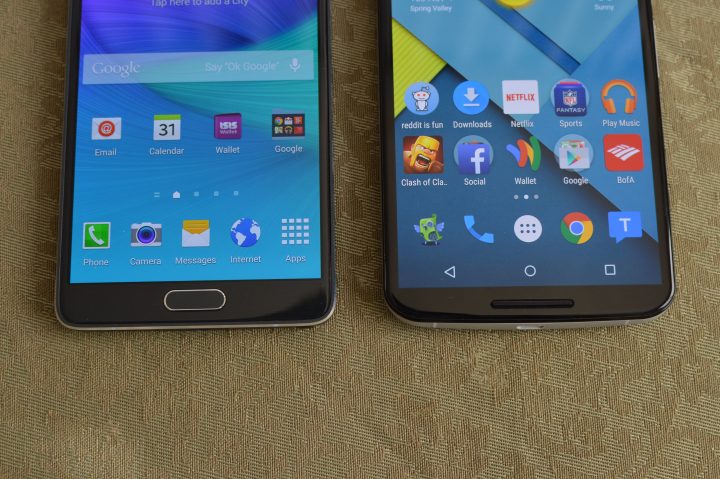 As the summer comes to a close more and more Galaxy Note 5 rumors have started to surface, but at a much quicker pace than previous years. That all is starting to make sense now, as we’re hearing from multiple sources that an August 12th or 13th announcement is coming, rather than the early September release we’ve seen for years from Samsung.

With that in mind, we have tons of information already about the specs, screen size, features, options, design and more, and how it will all stack up against the competition. Devices like the big 5.9-inch Nexus 6 that offers a bigger screen in a similar sized device.

The Galaxy Note 4 was and still is an excellent smartphone, but so is the Nexus 6. They’re very similar in a way, but vastly different thanks to the S-Pen stylus and micro-SD slot from Samsung, and different software from Google.

While we don’t know everything about the all-new Galaxy Note 5 just yet, we have a pretty good idea of what to expect. This is based on a slew of rumors, tons of information floating around, not to mention Samsung’s typical update cycle and current devices like the Galaxy S6. Here’s an early comparison (based on rumors) of how the Note 5 will compare to the Nexus 6.