The new Samsung Galaxy Note 7 is finally official and set to be available on August 19th. Loaded with top-tier specs and improvements across the board the Note 7 could be a great replacement for last years Galaxy Note 5. Below we’ll compare the two for potential buyers or those looking to upgrade.

On August 2nd Samsung unveiled the next Galaxy Note with a better design, improved specs, a brand new Iris eye scanner technology, a curved 5.7-inch display and last but not least confirmed it’s water resistant. There is a lot to like, and multiple reasons its worth getting over the Note 5.

For months on end rumors were talking about a Galaxy Note 6, but Samsung skipped right to calling it the Note 7, and it’s worthy of the name thanks to a slew of important upgrades. Here’s everything you need to know about the new Note and now it compares to last years model. 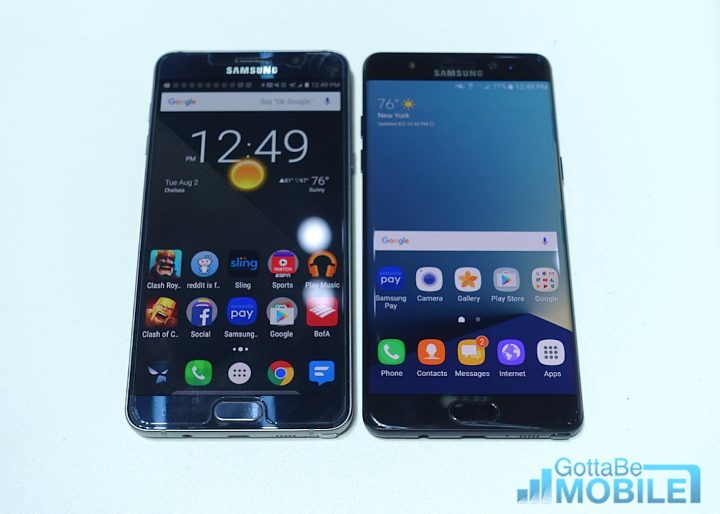 The Galaxy Note 5 debuted last year during the month of August with the Galaxy S6 Edge Plus, and both phones were extremely popular and powerful. However, they didn’t have a micro-SD slot, enough storage, a removable battery or even a big battery for that matter. Both of those problems have been fixed in 2016 with the Note 7, along with countless other new features that owners will be happy to have.

One thing worth mentioning for many potential buyers is the display, which we’ll talk about more in the slideshow below. The Galaxy Note 7 does not have a regular flat screen like most smartphones, and all other Note devices. Instead it’s curved on the edges like the Galaxy S7 Edge, or the Galaxy S7 Edge Plus from last year. Some will love it, others not so much, but it’s actually something we don’t think any owner will mind.

When the Galaxy S7 Edge was announced with a big 5.5-inch screen many figured Samsung would increase the size of the Note, to separate the two. However, that didn’t end up happening and the end result is two phones that are extremely similar in what they have to offer. The Galaxy Note 7 is a combination of the older Note 5, and the impressive new S7 Edge.

Those who passed on the Galaxy S7 Edge because of the smaller screen size will be happy with the size of the new Note. It’s bigger, curved, more powerful, faster, more secure and water-resistant. It has all the makings of a flagship smartphone, and all the issues owners had with the Note 5 have been addressed. Lets get started.