It looks like the forthcoming Samsung Galaxy Note 8.0 may have been hiding in plain sight when Samsung debuted the Galaxy Note 10.1 tablet with the S-Pen in a new red hue. The Galaxy Note 8.0 is expected to compete closely with Apple’s smaller iPad mini tablet with a 7.9-inch display, and like other phablets and tablets in the Note family, Samsung’s 8-inch Note will also be equipped with an S-Pen. The device is anticipated to be announced at the Mobile World Congress trade event at the end of the month.

The folks over at Pocket-lint had noticed the Note 8.0 behind the red version of the recently unveiled Note 10.1. 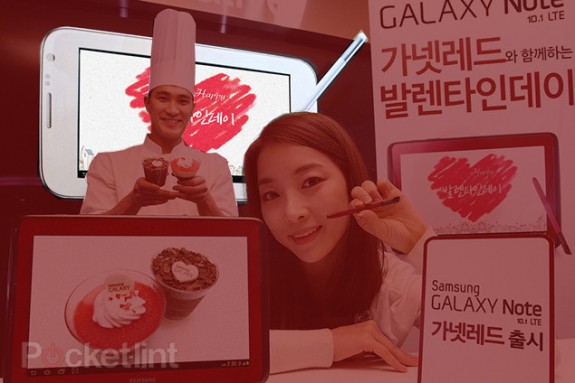 Samsung’s head JK Shin had previously confirmed that it would be announcing the 8-inch Galaxy Note at Mobile World Congress, but the executive did not give any specifics or details about the tablet. As it does bear the Note branding, it’s pretty much confirmed that the device will come with the digitizing S-Pen stylus along with Samsung’s suite of S-Pen enabled apps, such as the popular S Note application.

The image that shows what is presumed to be the Galaxy Note 8.0 doesn’t look anything like the Galaxy Note 10.1 tablet nor does it resemble the Galaxy Note (5.3-inch) or Galaxy Note 2 (5.5-inch) phablets. However, that said, this device may bear more resemblance to the phablet devices than the tablet in the lineup, so perhaps the Galaxy Note 8.0 may also be a phablet-class device. If true, it would be Samsung’s largest phablet to date. Additionally, if this is the case, it would mean that an 8-inch tablet would also be able to make calls should users need to.

This makes it unclear if the Galaxy Note 8.0 would then utilize Android OS for smartphone and have a smartphone experience, like the Note and Note 2, or if it will utilize a tablet-optimized OS like on the Note 10.1. Having a display that’s larger than the Note 2, the Note 8.0 would certainly benefit from the tablet-centric OS, else it means that it would just scale some smartphone apps to a larger display, making the apps look unpleasing and awkward on a larger screen.