Samsung has recently unveiled its Galaxy Player 5.8, a personal and portable media player with a larger 5.8-inch display that straddles the media player market that’s traditionally dominated by Apple’s iPod series as well as the tablet sphere. The device has a 5.8-inch LCD display panel with a qHD 960 X 540-pixel resolution. The display on the Galaxy Player 5.8 is a whole inch larger than the 4.8-inch panel on the Galaxy S III flagship Android smartphone; there are also some key differences as well–the Galaxy S III has a higher 720p HD resolution and uses a Super AMOLED display technology.

The device will come with Android 4.0 Ice Cream Sandwich as well as Samsung’s TouchWiz UI. Bundled inside will be either 16 or 32 GB of internal storage memory along with a microSD card slot. There will be a 2500 mAh battery. 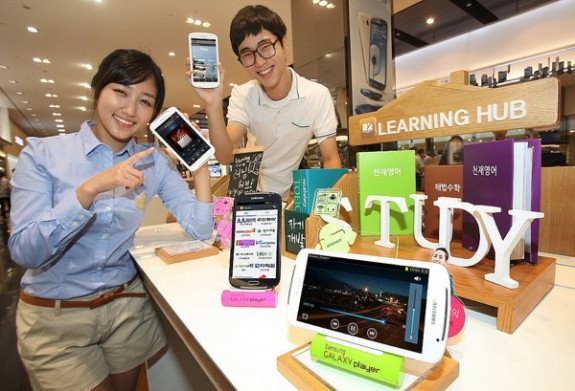 The Galaxy Player may make its official debut at IFA. We will be on-hand at the Germany-based trade show to have coverage.

The 5.8-inch display may signal that Samsung is also looking at this display size for its upcoming Galaxy Note refresh. The original phablet had debuted almost a year ago with a 5.3-inch display and rumors have been swirling recently that Samsung may increase the display size to a 5.8-inch panel. Likely, the South Korean Galaxy Note-maker will keep the same 720p HD resolution on the Galaxy Note 2 instead of adopting the qHD resolution on the Galaxy Player 5.8.