Galaxy Round Official: Samsung Takes the Wraps Off Bendy Phone

After a detailed leak of Samsung’s curved, flexible display smartphone earlier today, the South Korean electronics-maker has taken the wraps off of the Galaxy Round, the world’s first smartphone with a flexible screen. With a 5.7-inch 1080p full HD display, the Galaxy Round bears a lot of similarities with the company’s powerful Galaxy Note 3 phablet, a device we had just reviewed recently, though this time around, the Galaxy Round will come with a curvature “on the vertical axis,” as The Verge puts it. 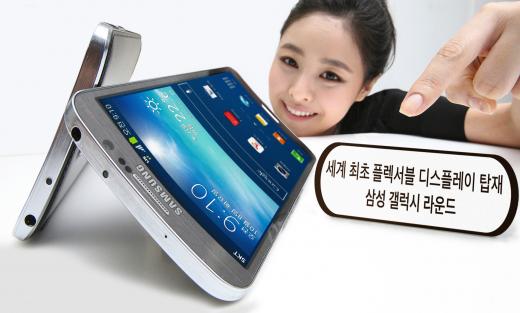 The phone, unfortunately, has not been announced for the U.S. market or any U.S. carriers at this time. However, if you’re in South Korea and are on SK Telecom, you can expect the Galaxy Round to launch for a little over $1,000 U.S. currency in a Luxury Brown shade.

And at this early stages with flexible displays, users won’t be able to bend the display at will, or even fold the Galaxy Round to an even smaller pocket-sized footprint for ease of traveling, but the screen does promise a new way to interact with the phone. Samsung is augmenting its TouchWiz UI to incorporate Round Interaction, which will support tilting gestures to display more information.

When you lay the phone on its back on a tabletop or other flat surface, tiling or rocking the phone to one side will allow users to quickly glance at notifications, such as missed calls, the time and date, and other alerts. Additionally, like curved HDTVs for the home, Samsung is also promoting the Galaxy Round as being more immersive, allowing users to glide through different homescreens as part of one large transition.

Update: Here is what Samsung has to say about the curved screen and some of the applications that users can take advantage of with having a curved display:

As a result of its unique curved design, users can take advantage of round integration experiences like the RollEffect that enables user to check information such as date, time, missed call and battery easily when home screen is off, and the Gravity Effect for creating visual interaction with the screen by tilting the device. For music, the Bounce UX enables users to control their music. When the GALAXY ROUND’s display is off while the music player is running, a short press to the left of the device will play the previous track while a short press to the right will play the next track. For pictures and videos, the Side Mirror feature enables users to gain access to list of the album content with a left and right tilt.

We’ll have to wait to see what the true “killer app” is for the Galaxy Round as Samsung continues its experiment with different form factors, designs, and experiences. And though Samsung had beaten Apple in launching its Galaxy Gear smartwatch, the company had admitted that its first foray into wearable computing lacks that killer app. Will the Galaxy Round suffer the same fate?

As the flexible display technology progresses, phones will be more resilient to damages and a benefit of this screen tech is that we likely can kiss goodbye to cracked screens and shattered displays. Down the road, bendable and foldable phones will open the doors up for even larger displays that will still be highly portable.

In addition to Samsung, LG has also confirmed plans to launch a flexible display smartphone, perhaps with the G Flex name.

At this time, will you be comfortable using the Galaxy Round as a rocking chair for your fingers?