Owners of the Samsung Galaxy S3 in the United States, who had been looking forward to the Android 4.1.2 Jelly Bean update because of the likelihood that the update would contain Samsung’s Premium Suite have, thus far, been disappointed as the Galaxy S3 Android 4.1.2 update in the U.S. has arrived without Samsung’s software.

In the past few days, both Sprint and Verizon have rolled out the long-awaited Android 4.1.2 Jelly Bean updates for their Samsung Galaxy S3 variants. While many had hoped that the Galaxy S3 Android 4.1.2 update would bring the Samsung Premium Suite along, like it did in other regions around the world, neither the Sprint nor the Verizon Galaxy S3 brought the software. 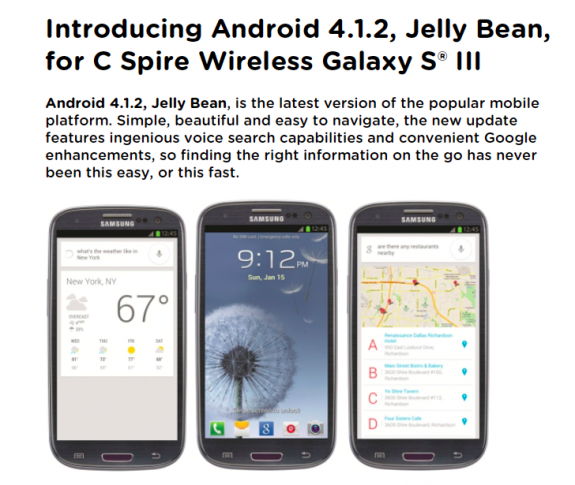 The C Spire Android 4.1.2 update has arrived without the full Premium Suite.

Instead, both updates contained performance enhancements and bug fixes. Those on other carriers, namely AT&T, T-Mobile and U.S. Cellular, hoping for a different outcome should start tempering their expectations as well as today, another Galaxy S3 Android 4.1.2 update rolled out in the U.S. without the Premium Suite on board.

C Spire, a regional carrier in the United States, has announced that its Android 4.1.2 Jelly Bean update is now rolling out to owners of the Samsung Galaxy S3. The carrier says that the software is rolling out in phases and that means that owners of the device should see the update pop up for installation over the next few days.

The carrier says that the roll out pushes out randomly to owners which means that those hopeful for an update from Android 4.0 Ice Cream Sandwich should stay patient.

Those who wish to get the software early can snag the software right now by using Samsung Kies, the software that allows Galaxy S3 and other Galaxy owners to snag software by plugging into a PC.

The update brings a number of improvements including Google Now, an improved user interface, updated core Google apps and more. However, unlike Galaxy S3 devices in other parts of the world. C Spire’s Android 4.1.2 update doesn’t bring the long-awaited Premium Suite to the U.S, at least not all of it, which means that owners in the U.S. are still waiting for the arrival of its features.

C Spire’s update does bring its variant up to speed with a few features that Samsung says are also part of the Premium Suite including Easy Mode, but the full Premium Suite of features remains missing.

It’s unclear if AT&T, T-Mobile and U.S. Cellular will choose to use the Android 4.1.2 update to bring Premium Suite to their variants but at this point, the odds look slim.

And while nothing is confirmed, it could be that owners have to wait until Android 4.2 Jelly Bean or beyond before getting access to all that the Premium Suite has to offer.