The launch of the Galaxy S4 (reviewed) is definitely keeping would-be customers on their toes. After some conflicting launch information from U.S. carrier AT&T Mobility about the launch date and Verizon Wireless sitting out of an April launch, it looks like T-Mobile is the latest to be plagued by hardships with Samsung making enough Galaxy S4 devices. Originally, T-Mobile was slated as one of the first U.S. carriers to launch the Galaxy S4 with an availability date of April 24, but the carrier has now quietly moved the launch date about five days later to April 29. T-Mobile’s social media team is letting fans know that the handset “comes to T-Mobile on 5/1/2013,” suggesting that in-store availability of the phone will come a few days after web orders. 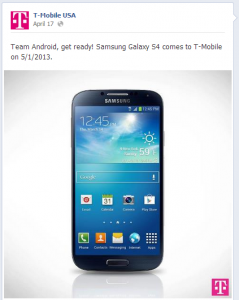 “However, due to an unexpected delay with inventory deliveries, the Galaxy S 4 will not be available on www.T-Mobile.com as planned on Wednesday, April 24,” T-Mobile’s website reads. “Instead, online availability is expected to begin on Monday, April 29.”

Unlike with other carriers, T-Mobile does not offer two-year contracts nor subsidies for the Galaxy S4 smartphone directly through its webpage nor its retail stores. Customers instead are given new interest-free financing options for the device and aren’t locked into any long-term contract.

Given the latest changes in availability timeline, it looks like Sprint Nextel and AT&T will be the first two national U.S. carriers to offer the Galaxy S4 Stateside starting on April 27.

The Galaxy S4, along with the HTC One, are two of the most highly anticipated smartphones in the first half of 2013, and both devices have seen their fair share of launch issues due to overwhelming demand. HTC has experienced component shortages related to the One’s new Ultrapixel camera technology and the latest battle with Nokia further constrains HTC as the struggling Android smartphone-maker will now need to find a new microphone component for its smartphones. Samsung, which is attempting an ambitious simultaneous global roll-out of the Galaxy S4 is facing constrained inventories as well, forcing variants in the U.S., UK, and select other countries to use rival Qualcomm’s Snapdragon 600 processor rather than its own internally-made and more powerful Exynos 5 Octa based on ARM Holdings’ big.LITTLE chip architecture.

When we reviewed the Galaxy S4, Samsung told us that there are over 160 new features and innovations compared to the last generation Galaxy S3. Though the hardware between both smartphones visually look identical, Samsung has added powerful software tweaks that experiment with touchless gestures as well as made improvements to the camera UI.