A picture purported to have been taken with Samsung’s upcoming Galaxy S4 Zoom appeared online.

The picture appeared online this past weekend on the social network Snapseed and was found after Techtastic noticed that EXIF data in one of Shariar Hossain of Samsung’s photos claimed the picture was taken by the Samsung SM-C101 –the same device that is believed to be the Samsung Galaxy S4 Zoom.

Since then, the photo seems to have been removed. 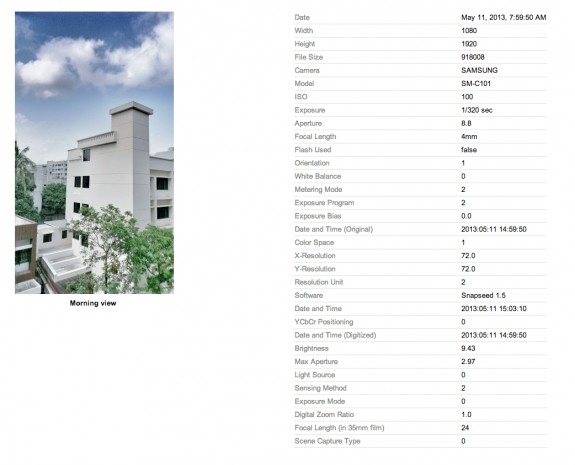 A Photo Purported to have been taken by the Galaxy S4 Zoom (Photo Credit: Techtastic.nl)

Just last week, a Samsung device carrying the model SM-C1010 recently passed through the Bluetooth Special Interest Group for certification. At the time, rumors from SamMobile had indicated that the SM-C101 and the SMC-1010 were variants of the same device.

Rumors of a successor to the Samsung Galaxy Camera first appeared earlier this year. At that time, the device was rumored to feature a 10X optical zoom and a 16MP sensor that would allow Samsung to compete on equal footing with Nokia’s PureView technology that first debuted inside the Nokia 808 PureView.

If the Galaxy S4 Zoom does feature a 10x optical zoom photos taken with the device would trump photos from taken from nearly all of today’s flagship smartphones since they all currently use digital zoom. While digital zoom allows manufacturers to create ever thinner devices, pictures that attempt to focus on objects from far away with digital zoom routinely become distorted and pixelated.

Samsung has been on a sort of mission to combine the best of today’s smartphones with that of a camera that could replace point-and-shoot cameras once and for all. When the company debuted the Galaxy S4 Zoom’s predecessor the Samsung Galaxy Camera, it attempted to fill the void left between smartphones and cameras with a device that boasted a 21x optical zoom, 4G LTE mobile data compatibility and a 4.8 inch touch screen.

Unfortunately, the device also debuted with a hefty price tag of $549 making it much more expensive than point-and-shoot cameras in its class. Also, some users found that that device just wasn’t as great at taking photos as the same cameras in its price range.