Unsurprisingly, it appears that Samsung may be keeping its naming strategy when it comes to the 2014 flagship Galaxy S5 Android powerhouse. The Galaxy S5 branding is still not officially confirmed nor announced by Samsung, though at this time it’s widely anticipated that the device would debut sometime in the first half of this year. However, as it turns out, reputable leaker @evleaks has it on good authority that the smartphone would be named the Galaxy S5.

“They’re sticking with a winner, name-wise,” @evleaks wrote on Twitter. The message was accompanied by a picture with a pastel background and the words “Galaxy S5” on top of the blurred background. 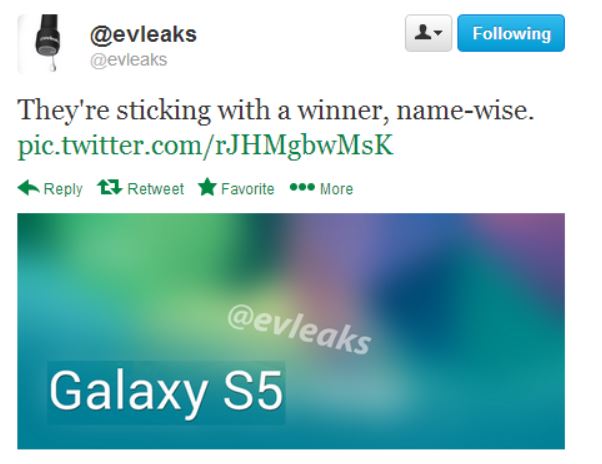 At this time, we still don’t know what the background represents, though some users on Twitter are speculating that this could be a new background wallpaper for the Galaxy S5 flagship this year.

Additionally, from the same Twitter feed, another user is pointing out some new cases that would be made for the Galaxy S5 flagship. This case is designed to have a flip down cover and is called the Flip Wallet case made by a third-party. The case allows the flip cover to protect the display from breaking or scratching when the phone isn’t in use. Images of the flip wallet case were not available and instead the manufacturer of the case is using placeholders. 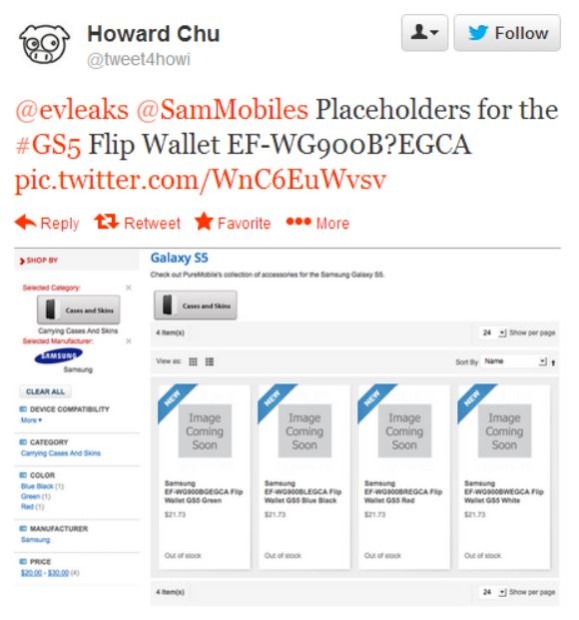 In recent days, leaks for the Galaxy S5 suggest that the phone would debut with a high resolution screen exceeding the full HD 1080p resolution that’s found on the Galaxy S4 that it would succeed as well as a new fingerprint scanner.

Moreover, there have been rumors that Samsung may be migrating away from the TouchWiz UI that was found on the Galaxy S4 to a Magazine UX interface that the company debuted earlier this year at the Consumer Electronics Show alongside the Galaxy Note Pro and Galaxy Tab Pro series. However, it’s also been recently reported that Samsung and Google reached a deal where Samsung may be scaling back some of its custom UIs on top of Android, so it’s unclear whether that deal would impact the Galaxy S5 launch.