There is now a little bit more concrete proof that Samsung would embed a biometric fingerprint sensor on its rumored flagship Galaxy S5 smartphone for 2014. Though the company isn’t commenting on unannounced products, famed leaker @evleaks had posted to Twitter an image file that reads “FingerprintService.apk,” saying that the file is “from [the] Samsung Galaxy S5.”

Fingerprint readers would be another way that Samsung could augment security measures on its smartphones in an effort to target enterprise users and compete against Apple. Samsung’s release of its Samsung Knox security was a direct jab at struggling rival BlackBerry to show that its Galaxy-branded Android smartphones could be secure and safe for use in sensitive environments. The addition of a fingerprint reader may help further Samsung’s efforts in this space. 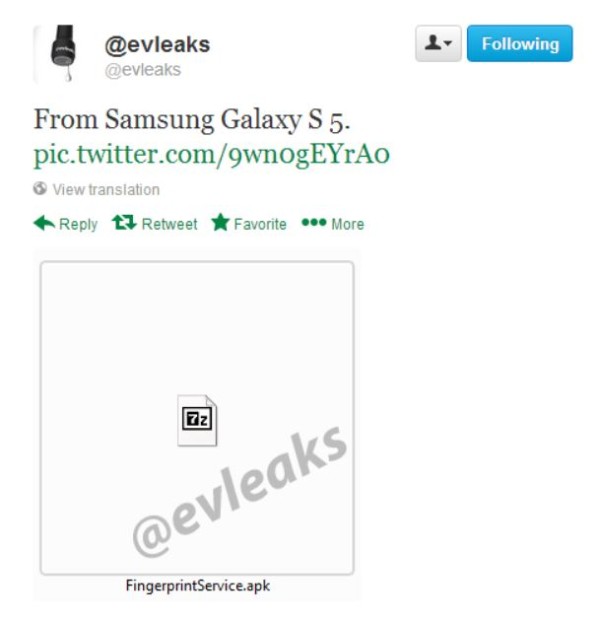 Though rival Apple wasn’t the first to embed a fingerprint scanner on its iPhone 5s in the form of the branded TouchID system, it helped to popularize the technology. Rather than requiring a PIN, password, or passcode to log in to the smartphone, users would just place their finger on the home button–the fingerprint sensor is embedded underneath hidden under a layer of sapphire glass for protection–and authenticate themselves this way. The other way that TouchID works is for purchasing content on iTunes or the App Store. At this time, ToucID’s use is still limited, though Apple is hinting at expanded possibilities with mobile payments in the future.

HTC is already using a fingerprint scanner on its HTC One Max phablet and LG is rumored to be bringing the technology to its 2014 flagship devices.

At this point, it’s unclear whether Samsung would be using a scanner that requires a swipe of the finger over the scan area or if Samsung would go the Apple route, which just requires a user to place their finger on top of the scanner and no swiping is needed.

In the past, there has been conflicting intelligence over whether Samsung would include a fingerprint scanner with some analysts optimistic that an iris scanning technology could debut on the Galaxy S5 in lieu of a fingerprint reader. Iris scanning is said to be far more accurate than fingerprints in the biometric security field.