The Samsung Galaxy S6 features and Galaxy S6 Edge features are the real reason you will upgrade and jump to the new Samsung smartphones instead of waiting for an iPhone 6S. Here are the most exciting Galaxy S6 features that Samsung shared on stage and hidden away in press information. While you wait for the Galaxy S6 release you can check out these awesome new features.

Some of these come from the Galaxy S6 specs and there are definitely some missing features like no Galaxy S6 Micro-SD card and no user-replaceable battery that frustrates users, but Samsung is counting on new upgrades and options to fill in these gaps and convince people to buy the Galaxy S6 and Galaxy S6 Edge.

Two major features are an upgraded Galaxy S6 design that features Gorilla Glass 4 on the front and back of the device and metal edges that deliver a noticeable upgrade from the plastic designs of the earlier models. The other major upgrade is Android Lollipop with a focused skin that removes the excess Samsung is known for and replaces it with a minimal skin that is closer to Android 5.0 Lollipop than it is to a traditional Samsung overlay.

Samsung is making major changes to the Galaxy S6 software, design and features that may not agree with every user out there. If you are upset about the lack of a Micro SD card in the Galaxy S6 and Galaxy S6 Edge you should still check out these Galaxy S6 features you’ll love to see why you might not want to swear off Samsung just yet.

Most of these work on both phones, but there are some exclusive Galaxy S6 Edge features that will stand out and might convince shoppers that the premium device is worth a higher price. Here are the most exciting and most important Galaxy S6 features you will actually use on these two new Samsung smartphones.

The Galaxy S6 and Galaxy S6 Edge both feature a 2k Display with 577 pixels per inch. The 2,560 x 1,440 resolution allows your phone to show a high-resolution image in incredible detail. The screen is Super AMOLED, which traditionally delivers a beautiful range of colors and dark blacks that look better than a traditional LCD. The Galaxy S6 Edge features two curved edges that play into other features, and look incredible.

There is no Micro SD card, but you can buy the Galaxy S6 and Galaxy S6 Edge in three storage options and it uses fast UFS 2.0 storage. You can buy the Galaxy S6 in 32GB, 64GB and 128GB options. All of these use the fast embedded memory that works with the new 3GB LPDDR4 RAM and processor to deliver a fast and responsive smartphone. If you need more storage, you can count on USB OTG options.

The Galaxy S6 display isn’t just using a high-resolution panel that delivers incredible colors and blacks, but it is also ready to use when you are out in the sun. Samsung shares that the phone offers enhanced outdoor visibility thanks to a brighter display. The Galaxy S6 and Galaxy S6 Edge displays offer a 600cd/mm brightness that lets you see the display better in the sun. The iPhone 6 display is rated to 500cd/mm and the Galaxy S5 at 480cd/mm.

Quick Reply From Back

The front and back of the Galaxy S6 is covered in Gorilla Glass 4. This new Gorilla Glass is designed specifically to prevent breaking displays when dropped to rough surfaces like concrete or asphalt. The Gorilla Glass 4 display survives drops up to 80% of the time according to Corning. With a glass display and glass back, this is an especially important Galaxy S6 feature.

Samsung delivers a new 16MP camera on the back and a 5MP sensor on the front, but the real star of this upgrade is the f/1.9 aperture. This is a fancy way of saying that both cameras let more light in when you take a picture. This leads to better photos in low light and in good light it can help create the cool effect where the background is blurred behind your subject.

The Galaxy S6 supports making mobile payments with NFC like the iPhone 6 and most Android smartphones, but it does much more. Samsung includes the ability to make payments with wireless magnetic card data. The service called Samsung Pay is accepted in 90% of retail locations, which is much broader than NFC payment support. It looks like this may only work with specific banks, but with a secure, fingerprint connected solution it is a feature many users will love when it arrives this summer.

The Galaxy S6 Edge will both offer Optical Image Stabilization, OIS,  which will help users take better looking photos in low light. The OIS feature lets a lens move inside to remove the blurry result that comes from small movements in your hands. This works when taking a landscape photo, but it won’t magically slow down a pet or a child.

Samsung includes S Health 4.0 on the Galaxy S6 and Galaxy S6 Edge. This combines with the heart rate sensor on the back of the phone to let users track their heart rate and stress levels. It may also help track blood oxygen levels like the Note 4, but we are waiting on confirmation of this feature.

The new Galaxy S6 metal design is an amazing upgrade that we cannot wait to hold. The Samsung Galaxy Note 4 uses a metal frame that delivers a vastly superior look and feel to the Galaxy S5. The new metal frame and four-color options will help set the Galaxy S6 and Galaxy S6 Edge apart from the old Galaxy S5 and it is a great feature even if it comes at the cost of a Micro SD card and user-replaceable battery.

The Galaxy S6 software runs on Android Lollipop, which is a version of Android 5.0. This is the latest Android software available, and for the first time Samsung is not making major changes. The Galaxy S6 software embraces a more minimal design that puts the features and functions you want to use front and center. This means less clutter in apps and no scrolling in the camera app to get to the important features. Overall Samsung’s changes are toned down, which solves a major consumer complaint.

The Galaxy S6 features an IR blaster that will pair with software on your Galaxy S6 and Galaxy S6 edge to control your home entertainment devices like a HDTV, Xbox One, DVR, cable box and sound system. You can also set it up to control devices at a friend’s house, a bar, at work and many other places so you are always in control.

If you’ve ever taken a photo where the whites are yellow or blue it is because the white balance is off. The Galaxy S6 and Galaxy S6 Edge use IR White Balance detection to detect the light around and adjust the camera to capture more true colors and crisper images.

Samsung will sell several Galaxy S6 accessories and Galaxy S6 Edge accessories including a new Clear View S View case that lets you see the screen through a cover that covers the full screen and back. There are also other options including a wallet case, a traditional S View case and several clear and colored case options so that you can protect and customize the Galaxy S6 and S6 Edge. 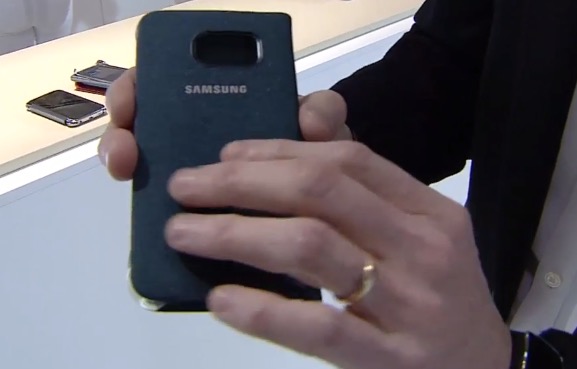 There are a number of first-party Galaxy S6 cases and accessories.

If you like to customize the look of your phone you can use a theme to change the look of the Android software on the Galaxy S6 without the hassles of rooting or installing a rom or a new launcher. We’re waiting on more details about this feature, but on other Android devices this changes system colors to match a background image and other small tweaks.

The Samsung Galaxy S6 will continue to offer the Private Mode that debuted on the Galaxy S5 last year. With this option you can hide some of your information in a private area that you need to unlock with your fingerprint sensor. With an improved fingerprint reader we expect this will be easier to use and will see wider adoption.

When you really need to make sure your Galaxy S6 battery lasts a long time you’ll turn on Ultra Power Saving Mode. This feature came on the Galaxy S5, but it is back on the Galaxy S6 and S6 Edge. It disables functions you don’t ned and uses a gray-scale screen to turn hours of standard battery life into a full day or longer.

Samsung includes many extras with your purchase of the Galaxy S6 and Galaxy S6 Edge. This includes a free Fleksy keyboard, 115GB of OneDrive storage for two years, OneNote and other free apps and services. We are waiting for the full list, but you can expect to see free subscriptions to online newspapers and magazines as well as other free apps.

The Samsung Galaxy S6 delivers a new and improved fingerprint sensor that is built-in to the home button. This lets users place a finger on top of the home button to log in or make a mobile payment. The Galaxy S5 and Note 4 require a swipe at the right speed and angle that makes one-hand use almost impossible. This new sensor will make it easier to unlock the phone, make mobile payments and use apps that tie into the fingerprint sensor.

We’re still waiting to find out when the Gear VR Innovator release date is and for an official price.