The Samsung Galaxy S7 release is inching closer, which is apparent by the onslaught of leaks that continue to surface regarding the new smartphone. We’ve already seen a few rumored specs and details based off of leaks, and today a brand new report is sharing additional key details ahead of the release date.

Recent reports suggest Samsung will have multiple different models, with different screen sizes, not to mention a new and improved 12.3 megapixel camera. Those details have reportedly just been confirmed once again.

Today, the popular benchmark application AnTuTu popped up with results for the Samsung Galaxy S7, sharing similar details to what we’ve heard in the recent past, well ahead of the release date. Below is the latest information from this leak which lines up with earlier reports. Read on for more details.

In 2015 the Samsung Galaxy S6 and Galaxy S6 Edge were released in April, and went on to become some of the best Android phones ever released. Samsung redesigned the entire device with glass and aluminum, made it a premium phone with a great camera, but cut out some key features like the micro-SD slot and more. Some of those features could return in 2016, and here’s what the latest leaks reveal.

According to a new AnTuTu benchmark, the Samsung Galaxy S7 will come with the same 5.1-inch 2560 x 1440 Quad-HD display as prior years. This leak doesn’t mention a bigger model, but we’ve heard time and time again a 5.7 or 6-inch Galaxy S7 Plus will also be released, not to mention a 5.5-inch Galaxy S7 Edge to fill the size gap. At this time it looks like Samsung has no plans to scrap the Edge model.

That said, this new report mirrors other leaks and details, but for the Edge, not the regular Galaxy S7. Those being the 5.1-inch screen, a new 8-core Snapdragon 820 processor with 4GB of RAM, 64GB of internal storage, and a new 12.3 megapixel camera. Yes, the Galaxy S6 had a 16 megapixel camera, but numbers aren’t everything. This will also allow for a thinner profile, without the big bulge on back, and leave room for a bigger battery. We’re hearing Samsung will increase it to a large 3,000 mAh battery this year, and of course keep the wireless and fast charging features. 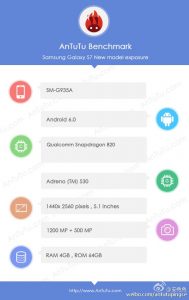 The new Galaxy S7 is rumored to have a bigger camera sensor with a lower 12.3 megapixel count, but a blazing fast f/1.7 aperture. Meaning the camera will be faster, take better images, especially in low light, and be improved across the board. Megapixels don’t need to go up to make it better, as we saw with the Nexus 6P or iPhone 6s.

Above is the AnTuTu benchmark. Confirming everything mentioned above and more. However, the model number lines up with it being an Edge device, meaning it could be the Galaxy S7 Edge for AT&T. If accurate, then original rumors of four Galaxy S7 versions, not three, could be right. We’ve been hearing one 5.5-inch Galaxy S7 Edge will be released, but this states otherwise.

If this leak is accurate we can expect to see a Galaxy S7 and Galaxy S7 Edge both with 5.1-inch screens, then possible two more Galaxy S7 Plus and Edge Plus variants with a 5.7 or 6-inch screen. Leaks continue to surface that are only leaving more questions than answers, so we’ll have to wait and see. We’re still holding out for a 5.5-inch Galaxy S7 Edge that’s a perfect middle ground.

As it stands right now, Samsung could release at least three Galaxy S7 smartphones around the end of February. We won’t know until Samsung confirms all the details late next month just ahead of the annual Mobile World Congress trade-show in Spain. Expect more details, leaks, and hopefully actual images of the device as the release date nears.