When we spoke with Samsung at the Consumer Electronics Show, the tech giant had promised that it would simplify the naming convention of its devices in the future, and it looks like the Galaxy Tab 3 Plus may be the first device to benefit from the simplified naming. We are hearing rumors that the third-generation Samsung tablet, and one that will come with a premium high resolution display, may simply be called the Galaxy S Tab.

The name is fitting considering that Samsung is trying to unify its branding around the highly successful Galaxy S series of smartphones. According to an unidentified tipster to Sam Mobile, Samsung will be “applying the same knowledge and marketing strategies to our high-end tablets.”

This would be a nice change from Samsung’s prior tablet naming conventions that’s been cluttered with a string of numbers, like Galaxy Tab 2 10.1, where the 2 designate the generation or series number and the last group of numbers–10.1–describes the diagonal screen measurement.

Reportedly the Galaxy Tab 3 Plus, or Galaxy S Tab as it may be called, would debut with a 10.1-inch display with a resolution of 2560 X 1600, matching the same high resolution display as what was found on the Google Nexus 10, a device that was built also by Samsung. The screen may be a PLS LCD display or a Super AMOLED PenTile screen.

If the tablet does use an AMOLED-based display, it would join the Galaxy Tab 7.7 and possibly a Galaxy Tab 8.0 device that’s recently rumored with a full HD panel. Other Samsung tablets have used LCD-based screens. 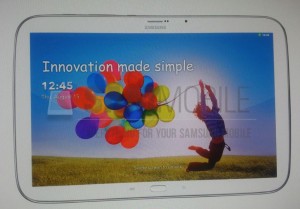 These specs seem befitting of a high-end tablet from Sasmung and the device would be an incremental upgrade over previous Galaxy Tab models. And while the specs appear to be plausible, the leaked image on Sam Mobile may be a good fake. The device shows a design language that Samsung’s been using on the Galaxy S smartphone and Galaxy Note phablets. Rather than the portrait orientation of the Galaxy Note 8.0, the Galaxy S Tab uses a landscape orientation and has the same physical home button with two capacitive touch buttons, one flanking the home button on either side. Moreover, what’s curious is that Samsung isn’t using the same front speaker design found on the Galaxy Tab 2 10.1 and the Galaxy Note 10.1 tablets. Rather, it has a single front speaker centered on the top bezel when the device is held in landscape orientation. This is similar to the portrait-oriented Galaxy Note 8.0, but doesn’t really make sense for a landscape-focused design.