The new “A World of Ice and Fire” iPhone and iPad app helps A Song of Ice and Fire (better known as Game of Thrones by some) fans keep track of the plethora of characters, places, and Houses throughout the series.

A World of Ice and Fire uses the books for reference which mean it uses illustrations of characters instead of the actors. Fans of the Game of Thrones HBO series should have no trouble following along, however, because the show follows the books so closely. The app is free, but without buying content the app only gives basic information on some characters and places. 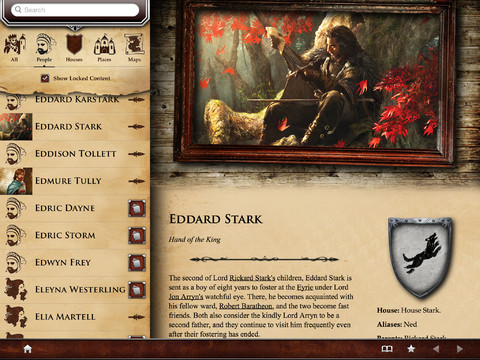 In order to gain more information on the characters users have to pay either $1.99 for the first book and $0.99 for each subsequent novel or $4.99 for everything in the app. The $4.99 purchase saves $1 over buying the pack individually. After buying the “InfoPacks” users can tell the app where they read to in the series so they can avoid any spoilers.

The app also includes a link out to iBooks so users can buy the books.

A World of Ice and Fire is helpful when reading the books not only for the character info and breakdown of Houses, but because the app contains maps of Westoros and Essos. The maps will help readers find where the characters are in relation to one another, which is especially useful when war breaks out in the realm.

If there’s any downside to the app it’s that it doesn’t offer a breakdown of any of the minor houses like House Reed from Greywater Watch. It does seem to include all the minor characters from the smaller houses.

A World of Ice and Fire is currently available for iPhone and iPad, though Mashable says versions of the app are coming for Android and Nook tablets sometime in the future.