Game of Thrones fans might have been screaming “you know nothing” at HBO Sunday night as the streaming service, HBO Go crashed under the strain of so many wanting to watch the season 4 premiere. Twitter was filled with outrage and plenty of “here we go again” remarks after HBO Go recently had similar troubles with the season finale of the also popular True Detective. HBO at first promised updates for those eager to watch, but then gave in and asked its customers to tune in later. (The  premiere aired at multiple times during the evening. 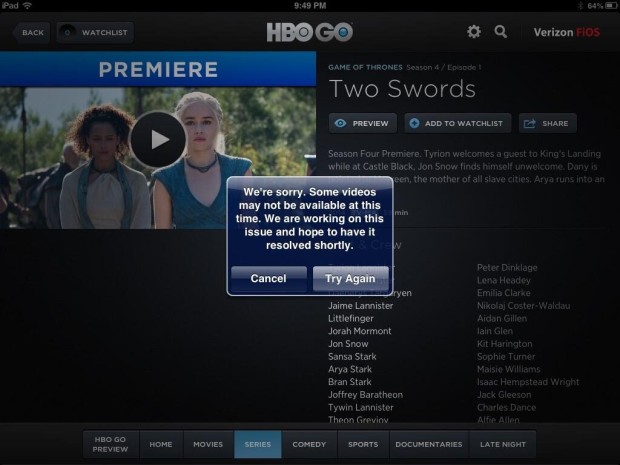 Unfortunately these types of crashes occur too often with popular services. Of course there are two ways to look at that. One is these companies should be ready to meet the demand. The other is that they have to be thrilled with the demand. For a show that will be available through the HBO Go service for quite some time there isn’t the same motivation on a company’s part that there is when streaming a live event. But tell that to the fans who make plans. Even if they are doing so using another’s account.

And there was quite a bit of criticism directed at HBO for coming up with some snarky responses.

The service eventually came back on line about 12 midnight central time.