Game of War is an addictive RTS style game for the iPhone, iPad and Android that delivers a lot of fun and a good amount of frustration. You can use our Game of War tips and tricks, Game of War strategies and what you need to be a better player. Officially the name of this game is Game of War – Fire Age, but most users simply call it Game of War.

This is not the same type of game as Clash of Clans or Boom Beach, but it is similar and remains a fun fix for mobile gamers who want to build an empire and use strategy to wipe out an opponent.

The Game of War setting is in an ancient civilization, which leads to a variety of gameplay elements and is also why you get to see Kate Upton in armor and ancient greek or roman settings in the many Game of War ads.

To do well, you need a Game of War strategy that includes building, researching, defending and attacking. You cannot play this game with a singular focus.

One of our favorite Game of War tips is to quickly build a great city with 60,000 power in less than an hour. This makes it possible to start the game with enough power to start getting things done and it can help avoid the frustrations of starting up. Keep in mind that one of the goals of Game of War is to convince you to spend real world money on in-game items. There are pop ups, bouncing icons and dozens of interruptions solely with a focus on getting you to buy in-app purchases to upgrade your army with real cash.

You will not find reliable and realistic Game of War cheats or hacks that you can use. Most of these promise unlimited upgrades and in-game items, but only exist to get you to fill out a survey or to give up control of your account. You cannot close the game and change the time on your device to make Game of War build faster, so you will need these Game of War tips and strategy guides to get ahead.

Game of War is free for iPhone & iPad, Android and Amazon Fire devices.

With Game of War hacks out of the question, you’ll need to focus on your Game of War strategy using these easy to follow tips and tricks.

How to Play Game of War

If you are new to the game, you can use this Game of War strategy guide to learn what you need to get started. This will walk you through the basics of setting up your kingdom better than the virtual Kate Upton can.

Here are some important Game of War tips to help you build up your power and your empire quickly. Here are some great tips.

Use Quests for Rewards – You need to use Quests to gain rewards. There are several types including Empire Daily and more. When you perform some actions you can collect resources and rewards. For others you will need to start a timer.

Quests Continue When You Close the App – If you are about to stop playing for a while, choose a quest that takes a long time to complete. The time will keep going after you close the game.

Game of War Items – Tap on iTems and My Items to see what you have. Some of your items, like the Beginner Teleports disappear if you level your big building up to level 6 before you use them.

Use these Game of War tips and tricks to get ahead faster.

What to Spend Game of War Gold On – Here’s a good tip. Don’t spend gold on things right off the bat and don’t spend real cash right when you start. You need to focus on the basics right now.

Create a Game of War Hero – Use your items and boosts to build a better Hero. This starts on the items screen, and you can give this hero upgrades and the special attributes that the Hero gains  will help your troops in the game.

From there this video goes into alliances and other information that you may or may not need to know. After you master how to play Game of War with the Kate Upton tutorial and this video you’re ready for leveling up faster.

Game of War Tips for Beginners

The next set of Game of War tips will show you how to level up to 60,000 power in an hour. It will also help you create a better stronghold and city for your troops.

Build a Gymnos – As soon as you can, build a Gymnos. When you earn XP it will help your hero upgrade. Almost anything you do in Game of War earns XP.

Build 10 Strategy – Build 10 of each building to unlock special bonuses. And it is a good idea to build them all near each other so that you can quickly manage them.

Upgrade Your Farms, Logging Camps & More – You’ll need to upgrade all of your farms, logging camps, and more so that you can unlock other buildings. You can see the requirements for upgrades when you tap on the item you want to upgrade.

Join an Alliance – If you are part of an alliance you can all help each other speed up buildings by tapping on help in the game. each time an alliance member taps, a minute is shaved off the timer.

VIP Status – You can use VIP updates from Items – My Items – Specials. When you activate VIP status and have VIP points you can got to VIP in the upper left and then tap on Use VIP to get faster upgrades.

Upgrade Your Defense – You don’t want to build an awesome city and leave it open to attack. When you get to the end of this Game of War tutorial you will need to upgrade your walls as much as possible to add protection.

Collect Free Rewards – After you play through all the tips in the 30-minute Game of War tips video above you need to go to your Quests section and collect a lot of rewards that you will unlock.

In this second Game of War strategy video you’ll learn about good troop upgrade paths, how to quickly get to stronghold level eight and other tips about getting a good base for your game. After you get to the Stronghold Level 8 you can build an Academy Level 8 which unlocks research for tier 2 troops. With tier 2 troops you’ll have stronger troops for better battles.

Get a Better Game of War Strategy 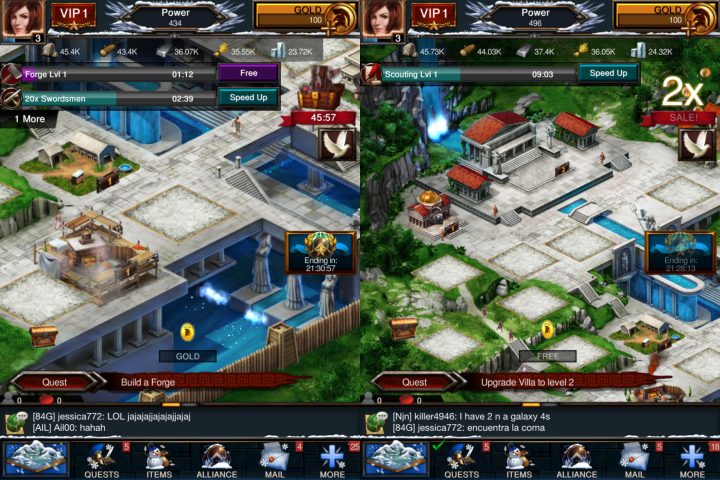 After you build up your stronghold, you’ll need a great Game of War strategy to become a better player. This will take time and either trial and error or research on your part. Some of our favorite Game of War Strategy tips are listed below so you can quickly find important information.

You can find other Game of War Strategy tips and tricks at Inside Game of War. This is one of the top places to look for more detailed strategies.

There are no shortage of services claiming to offer Game of War hacks and game of War cheats, but as we’ve found in the past, these are all designed to get the user to sign up for services, share personal information or post to social media accounts for the promise of free gold and in-game items.

Don’t bother with Game of War hacks and cheats that just want your information.

The apps look somewhat convincing, but they cannot connect to your device and hack the game to get you free upgrades. Instead of connecting to the game and giving you free gold, silver or wood, you’ll fill out a survey and get nothing for your time. Don’t waste your time with these offers.