It hasn’t been that long since Microsoft announced the Xbox One, but already users are clamoring for a better deal on the console’s related games and accessories. Luckily for those users, GameStop seems more than happy to honor their request. GameStop is holding an exclusive sale that will see the latest in Xbox One games and accessories available for cheaper than they are today.

Of the sale, which GameStop says will last until Sunday, the thing most users who’ve already picked up an Xbox One console are going to be interested in are the slightly cheaper games. For the duration of the sale Ryse: Son of Rom, Dead Rising 3, Kinect Sports Rivals & Forza 5 will all be priced at $49.99. That’s $10 less than what each of those games are available for today.  Also being included in the sale are copies of Lego Marvel Super Heroes, Zumba World Party, Thief and Tomb Raider. Those will be priced at just $39.99 until May 13th. 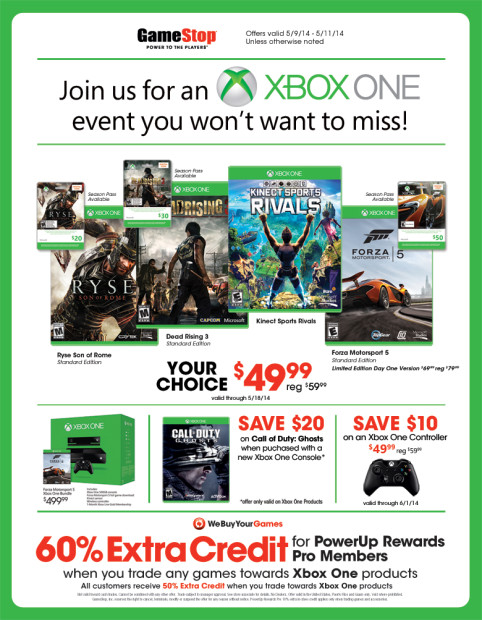 Though none of those games are as cheap as a used Xbox 360 game, however, at this point any sort of price reductions are positive. Especially, since the Xbox One is going through its expected drought of big name titles to play. Xbox One owners couldn’t be blamed for picking up one of these titles to hold them over until something new or more exciting arrives for the console over the next few months. Potential buyers should note that the sale doesn’t include Titanfall, this year’s biggest launch for the Xbox One by far. New, that game will still cost users $59.99. Users who haven’t yet purchased an Xbox One are better off picking up a console with the game bundled with it for $499.99.

Speaking of the hardware, that’s really where users are going to see the most savings here. GameStop hasn’t slashed the price of the Xbox One itself. However, it is boosting the amount of credit users get from turning in older consoles, games and accessories in order to pick up the Xbox One. The flyer on GameStop’s website indicates that GameStop Rewards card members can expect a 60% boost in trade-in value while all other shoppers can expect a 50% boost. Users don’t have to use the credit toward an Xbox One, the credit boost can also go towards Xbox One games and accessories.

On the subject of accessories, GameStop is also knocking down the price of an Xbox One controller to $49.99 from $59.99 as well, though users will be able to take advantage of that deal until June 1st.  Other discounted accessories include $10 off the $99.99 Ear Force XO Four headphones. GameStop is slashing the price of the $129.99 Ear Force Titanfall Atlas headphones and the $139.99 Ear Force XO Seven headphones by $20 too. Users will have until May 13th to take advantage of those deals.

Over all, this Xbox One deal will likely be the best cost savings potential buyers see heading into next month’s Electronic Entertainment Expo in June. In fact, these may be the best cost savings users see until the holiday season. There haven’t been any rumors of a price drop for the Xbox One console itself. That means that for now picking up the console with a bundled copy of Forza 5 or Titanfall is the best deal users are going to get. It’s also worth noting that prices of games released last fall have mostly remained steady. In fact, digital copies of most of the titles GameStop is offering discounts on are still priced at $60 in the Xbox Store.

Just because these deals are the best we’re going to see for a while doesn’t mean users should rush out to their local GameStop to trade in their old console and accessories.. GameStop is offering extra trade-in credit, but it’s worth calling a local store to see how much value it’ll place on your old equipment before heading into the store. Historically, GameStop has offered very competitive trade-in rates when compared to Best Buy, but that’s not really saying much. The Original Xbox 360 and a single controller barely fetches around $30 when being traded-in.